Smoke On The Water, Fire In The Sky


We had arrived in Trail, Oregon, a remote dot on the Rogue River. At eleven o’clock at night, after 12-1/2 hours on the road, we had not noticed any stars, but the trees were towering over us in a gang and my eyeballs were not really tracking much anyway; surely we city folks would be treated to a skyful of stars the next night. Meanwhile, we had the clear blue depths of Crater Lake in Oregon’s only national park to look forward to. Sure, it’s depicted on the quarter, but we heard it’s even better in person.

The next morning we woke to an inflamed sun smoldering in a butterscotch sky. The same webcams that had boasted a blue lake yesterday were apparently on the blink: flat gray. But we had an hour to travel and anything could happen.

It smelled funny out. 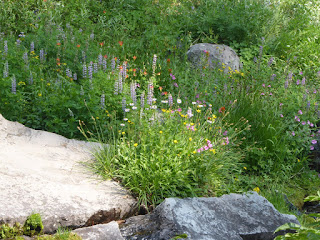 We figured we’d start out at the lodge, where we could learn all sorts of interesting geological and botanical things, but the parking lots were full, and so we slid back down to the Rim Drive, and we pulled over there to have a look at just the right spot, right smack in front of Wizard Island, and we got out, and we stood on the rim, and Yes! There it was–see? That sort of darker gray shape against the lighter gray expanse of probably-water? No, left of where you’re looking. There you go!

Well, the Blanket Fire was only about a quarter-mile to the west, on the slopes of the old volcano, and the wind had shifted since yesterday. It could shift again, though. Right? Sure it could. 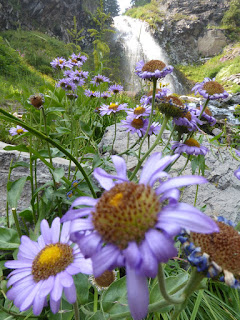 High above us, a pig flapped by on strong pink wings.

Meanwhile, we knew we were standing at the exact perfect spot on the rim of the caldera, because with our backs to the lake, and the sun on low power, and our arms in the air, we could get three bars, and stare at our tiny screens, and thereby learn that Crater Lake was formed after a massive volcanic eruption that lopped a mile off of Mount Mazama and redistributed it as far as Saskatchewan, all of which we knew already. Also, that it is the deepest lake in North America and the ninth deepest in the world, which we also knew.  Also, the name of that actor lady who was married to the guy who directed the movie with the fellow with the screwy teeth. Were those his real teeth? Damn. Down to one bar. 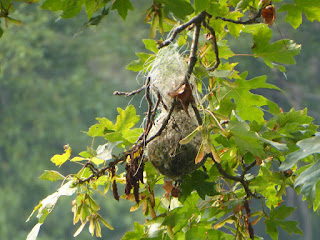 Well. We were still friends, and we were still ambulatory, and we found us some waterfalls, and some flowers, and some butterflies, and a decent place for pie on the way back to the cabin, and an astonishing stone canyon barely containing the mighty and muscular Rogue, and a handsome troop of Zuni hot shots taking a break from firefighting, and a beer and a bowlful back home, as the bountiful river slid away to the sea. There were no stars. There was a tree full of oriole nests hanging over the river. One of them was built to last: half of it was made out of fishing line. 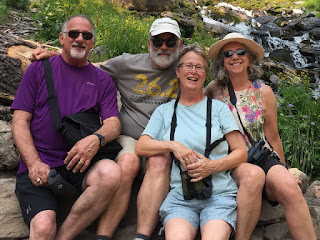 That’s what you do. You take what you find and you make the best of it. We’re short on blue lakes and the Milky Way, but we’ve got friendship with over forty years of weight on it, and it’s pressed into crystal by now. We can throw a lot of light.