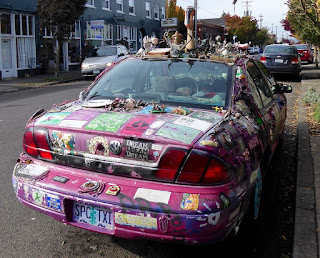 Two recent related letters to the editor reminded me of my childhood, which only makes sense. Because why would they remind me of your childhood?

In the first, Trump supporter Gary W. Christenson bemoans the fact that hardly anyone but him has a political bumper sticker anymore, or a flag decal on their car, and this is a sign that nobody cares about the sorry state of our country. He was also bitter about the greed of we, the people. I’m not sure it is a sign of anything. I think the absence of bumper stickers is less important than the fact that people keep using “we the people” as the object of a sentence. But the gentleman is correct: you don’t see many bumper stickers anymore. There are people who festoon their cars with enough stickers as to leave no doubt whatsoever what kind of people they are, or road-rage targets they would like to become. But mostly our cars are unadorned. They’re $40,000 items, and not the old family Rambler. 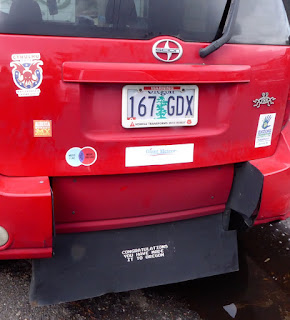 When I was a kid there were tons of bumper stickers. Some were political but most were advertising roadside attractions. They weren’t necessarily voluntary stickers.  They were just promotional barnacles your car would pick up by virtue of parking in a lot for an attraction. Take the kids to see Luray Caverns, and you’ll come back out to find a gigantic Luray Caverns sticker splayed across your back bumper. This was very common in those days because there weren’t nearly as many lawyers as there are now.

The political bumper stickers of the time were probably helpful to alert you to the folks you shouldn’t talk politics with in the church basement, if you didn’t already know. Politics has always been contentious. But it is more so now. Before, you’d just know that the guy with the Nixon-Lodge sticker wasn’t your kind of people. Now, you can safely assume, no matter which side you’re on, that the owner of the opposing-camp bumper sticker is personally in favor of ushering in the Apocalypse, and must be burned with the fire of a thousand suns.

Which brings us to the second letter to the editor, in response to the first. Kit Hogan complained, and rightly so, that every time she put a bumper sticker on her car “in this liberal state,” she got her car keyed, or windshield wipers ripped off, or vulgar notes left on the window. Worst of all, a “Veterans For Bush” bumper sticker resulted in her car being covered in phlegm. 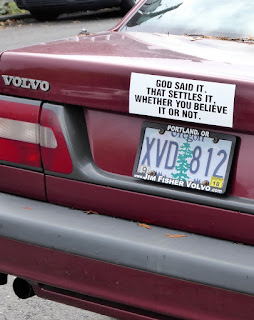 This also reminded me of a time in my childhood when I was more or less covered in phlegm. I had a series of really bad colds in fifth grade and at one point I felt like a snot factory in boom times. Mom gave me one of those little Kleenex-packs with two or three tissues in it which were completely overwhelmed by the first hour of school. After that, every sneeze resulted in a fluid spill which I believe I decanted onto the bottom of my desk and was otherwise helpless to mop up, a foreshadowing of personal feminine-hygiene horrors yet to come. It was dreadful. And I’m not proud of this, but I developed a fantasy of a world in which my grades would be determined by the quantity of phlegm I could produce. There would be something like an S&H Green Stamp collection book involved, with little squares that could be topped up over time (snot left to dry, in the viral stage, boogers in the healthy times). At the end of the school year I could proudly show off my completed pages, two pages per grade increment, say, with a full book earning an A-plus.

It is remarkable that I was ever considered college material.

But I did learn enough not to put political bumper stickers on my car.