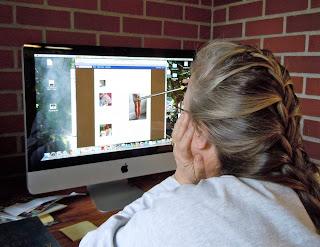 I don’t like to mess with something that’s working for me. If looking like a scruffy pound pup moves people to bring me inside and feed me, I’m not going to change just for the sake of dignity. If I’ve racked up 57 years of continuous air breathing, I don’t want to take up scuba diving. Even more adamantly, I will not change anything related to my computer if I’ve figured out a way to make it work. I may have done the equivalent of taking a document, walking it into a room, getting out the step-stool, hauling the box off the top shelf, grabbing a sticky label and applying it to the document, running around the yard three times and plopping it in the tool shed, but that’s where I’ll find it again. Don’t start telling me I can hit two buttons and shoot it into a safe deposit box a foot away. I don’t want to know.

So what does my nice host site Blogger do but start making all kinds of template choices available to me? I hate choice. Choice is why we never get out of the grocery store. Choice is why it’s almost certain that the latest whiz-bang electronic device we bought was the wrong one. Choice is the enemy of happiness.

Until recently, when I wanted to post a new piece on Murrmurrs, I went to the front door of the site like everyone else and used my key and went straight to the study and cranked one out. Now, thanks to Blogger, I can still get to the study, but not without going through a giant foyer with pretty pictures down the sides. “You can have one of these!” the butler says. “Any one you want! Any color you want!” I’d smack the butler and push on to the study. Finally, one day, I stopped to glance at the pictures.

There are about five new templates with lots of opportunity to re-jigger. Things get bigger, wider, pinker, brighter, right in front of your eyes. I like my old template. And I really hate messing with something that already works. Last time I tried to take a screwdriver to my template, my whole site blew up. You probably heard it from there. Why would I change?

Because it’s fatter, and I’ve put a lot of mental capital in the notion that fatter is better.

When I picked out this template, there were about a dozen choices. Mine jumped out at me. It was conservative, stately, a little rumpled, didn’t put on airs. It had a name that I do not recall, but it might as well be called “Old Fart With Writerly Aspirations.” If you do a casual cruise on the blogosphere and loop into a groove with a lot of author types, you’ll see this template a lot. We’re drawn to its old-parchment body. Spinster-lady wallpaper drapes down its sides. The blinds are always drawn, and the air is redolent of old books, African violets, medicine, and a little pee. No one with this template is planning to wow anyone with graphics. We are serious wordsmiths, and we don’t want anything distracting people from our literary pearls.

Most do not even hang up pictures on their writerly sites. I do, because I worry that if I creep past 600 words a post, my audience will panic and click off. The photographs are little visual park benches. Folks can rest up and then find the stamina to push on to my last, perfect word. I think it’s working for me. So why would I change?

It’s the damn wallpaper. I like it, but I have to squeeze every last thing in a narrow curtain down the center of the page. If a bigger photograph crowds my paragraphs, the words dangle down the edge like they’re Chinese. My sidebar is smashed thinner than a passenger on the window seat. It looks like I don’t even care about my blogroll. We don’t want to put too much pressure on those Poop Posts.

So I’ve been tinkering with the new templates. I’ve tried to jigger most of the color and flash out of them. I haven’t succeeded in getting them dull enough yet; we may be stuck with the wallpaper and parchment. If anyone has an opinion, hang it off the hem here, but try not to blow anything up.