So a man ballooned right up under the short skirts of space, jumped out, and plummeted back to the ground. If that sort of thing were easy, it would happen all the time. It would be raining bits of abusive-husband ash, lecherous-boss nuggets, and flaming assholes. But it’s hard to do, especially if you’re interested in returning the man in original condition. It takes plenty of courage, or some quality that stands in for courage. Austrian daredevil Felix Baumgartner just accomplished this feat, operating out of the Testicle Proving Ground in Roswell, New Mexico. He was wearing a miracle suit to protect him, a suit five years in the making, emblazoned with his sponsor’s logo–Red Bull, the official energy drink of flaming assholes. He was encased in a space-age capsule tethered to a massive helium-filled balloon made of dry-cleaning bags, and on October 13th, 2012, he rose into the air, leaving his sobbing mother behind.

The risks were many. His goal was to reach the very top of the atmosphere at the edge of deep space, where all the blue runs out, a distance of about 24 miles. At 63,000 feet, the blood begins to boil. At 90,000 feet, the temperature is minus-90 degrees Fahrenheit, which is even colder than it would be in Centigrade, and that’s without taking wind chill into account. Mr. Baumgartner stepped out of the capsule and shot back to earth. He probably lightened his load right off the bat, unless he took care of that before he left. And he succeeded in one of his goals, which was to surpass the speed of sound. His screams began arriving several minutes after he did. It’s hard to imagine anyone having more guts than Felix.

But. It turns out that human blood does not actually boil at 63,000 feet, because if it did, the smaller bones in the skeleton would be al dente by 100,000 feet, and the human would stick to the ceiling of the atmosphere, but he doesn’t. He comes right back down. The skin and muscles and other standard wrappings keep the lid on the pot, as it were, although the blood might fizz up a little. Still, it’s hard to imagine a braver man than Felix.

But. The other reason we know what happens to a guy’s blood at 63,000 feet is that some other guy did this exact same thing fifty years ago, pre-Gatorade, let alone Red Bull, only he went up in a handbasket wearing tin foil and a snug hat. Joe Kittinger was one of the stout pioneers of the space program, and he was testing the proposition that someone who fell out of a spaceship, in those early days before the door latch was perfected, might be returned safely to ground. Joe was not fearless. He had claustrophobia, but apparently was okay with heights. These were the heady first days of discovery, and much was not known. They learned things bit by bit, using such means as setting astronauts on fire. In a test flight, Mr. Kittinger stepped out of the balloon, and the first parachute to unfurl–a stabilizer, designed to keep him from going into a spin, which is only fun for the first few seconds–promptly wrapped around his neck and rendered him unconscious. 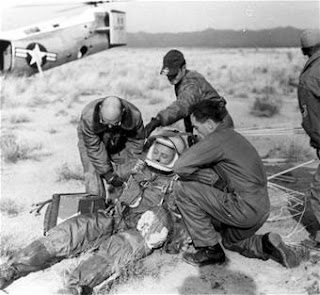 On his ultimate flight, he noticed a bit of a rip in his glove on the way up, considered aborting, and then, in words straight out of the space-pioneer handbook, he bellowed “oh, well” into the waning atmosphere and continued up to an altitude of 107,800 feet. By this time his hand had swelled up to the proportions of a Macy’s float and he had to complete his descent with one hand tucked into the opposite armpit.

But. His blood did not boil. He survived his death-defying leap, went on to fly 483 missions in Vietnam, was shot down, and was taken prisoner in Hanoi, where he told his captors that they didn’t particularly scare him. And I’m thinking they didn’t.