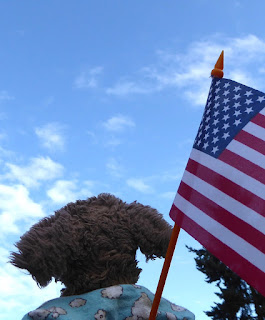 It began when quarterback Colin Kaepernick dropped quietly to one knee during the national anthem, before a football game. He explained later he was declining to honor a flag for a country that oppresses people of color. “There are bodies in the street and people getting paid leave and getting away with murder,” he went on.

He’s right. There are. Young black men in particular are reminded constantly that their lives are not worth as much as mine. That they’re expendable. That our justice system continues, as ever, to serve some of us and not others. Under the rain of daily indignities, one might expect rage and fury, and not the composure of a man on bended knee.

Which did not prevent white people from getting hysterical. It’s disrespect! It’s a slap in the face to all who have suffered and died for our flag! All over the social media, on pages littered with racist memes, their friends’ if not their own, they declared themselves appalled and affronted by this simple assertion of self-worth.

Soon the memes were joined by an historical photograph: Martin Luther King Jr. on one bended knee, head bowed, leading fellow protesters in prayer after they were arrested. As always, it could be bent to serve any viewpoint: an admonishment to racists? A proper posture for a Negro? Or this, from a woman who claimed–somehow, without being struck by a thunderbolt–to have a great deal of respect for MLK. Her comment: “If those NFL players who are taking a knee during the national anthem had their heads bowed like Martin Luther King Jr., that would be acceptable.”

I didn’t have to check to see that she was not alive when MLK was. It was clear. Martin Luther King Jr. was not beloved of white people like her until well after he was murdered and safely in the grave. If only Colin Kaepernick had bowed his head, it would be acceptable? If only!

If only he had bowed his head. And held a kitten. During Amazing Grace, and not the national anthem. In his own house. Where we can’t see him. And certainly not in a sacred arena like a professional football stadium.

Ours is not the flag of North Korea, of Russia, of any totalitarian state. Not yet. This flag is the symbol of our freedom and duty to protest. If our soldiers have fought and died for a flag, that would be travesty enough; but it takes nothing away from their courage and sacrifice to note that they have often fought and died in service to the most powerful among us and the mineral resources they have built their fortunes on, to the despair of all people unlucky enough to have been born over those resources. “Freedom” is a code word designed to guarantee your complacency as we wage war for any reason. Freedom is what you’re trying to take away by compelling a man to salute, by insisting on  a deferential posture.

In which they are living a different and harsher reality than you, Petunia, that you choose to remain ignorant of, or refuse to acknowledge, or believe that, fundamentally, they deserve.

Petunia? This isn’t even that hard. The only thing being asked of you, for now, is to pay attention. To hush for a moment and listen when your fellow Americans are trying to tell you something you do not know, or do not wish to know. You should bow your head. You should be ashamed.