Still Between Dust And Dust 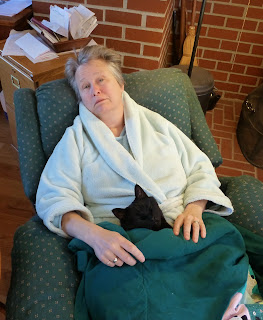 At some point, the mature person who has already bushwhacked her way through all of life’s other milestones begins to think about death in a non-fictional way.  That’s all that’s left, and it is moreover closer than it used to be. Some people have grand plans for themselves, but I don’t. I figure on being a brief damp spot, followed, in a geologically insignificant amount of time, by a small heap of dust and flakes with no opinion. Don’t be sad for me. I’m not. For those of us without even the staying power to be an all-purpose spirit drifting in stardust, thinking about death gets pretty specific. I just hope for the best during the endgame.

The way I prefer to imagine it, the act of dying will be a gentle thing, somehow devoid of panic. There will have been some sort of shift so that the mind is no longer afraid of being quenched. Ideally, things will just wear out and I will slip from this life without stress or embarrassing emissions. I gave the concept a practice run the other night when I got sick.

Not sick sick. Just one of my peculiar colds in which the symptoms occur all out of order or maybe some of them don’t manifest at all. In this case, I developed a blatting baritone that was only minimally sexy and began to want to cough recreationally most of the time. No sore throat. No congestion. It was merely annoying until the third night, when a little fever crept in.  At that point I holed up in a comfy chair with a blankie over me and churned out heat for the lap cat. Dave poured me a beer and I soldiered through it.

Uh-oh. I don’t soldier through beer. Probably, I thought, this is a sign that I am dying. And I don’t care. It’s okay. As long as I don’t have to get up out of the chair, I’m fine with whatever comes. It’s peaceful, really. This is what is supposed to happen. You begin to separate from the joys and cares of life. Like, right now, as long as the quilt is still up under my chin, and the cat doesn’t have an epizootic and patch out, and nobody is expecting anything of me, it’s all good. 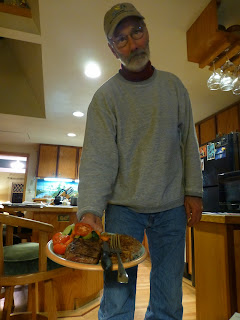 Dave made me a steak and hash browns with a bright salad on the side, and asked if I’d like a glass of red to go with. No, I don’t think I want any wine. I caught his raised eyebrow of concern, and realized: yes, I am dying. I can see that now. It’s not so bad. It doesn’t hurt. Do not worry about me. I will just sit here and fade away. I will be a pile of dust soon. I don’t need to tell anyone what folder the book I’m writing is in, or where the sheet with all my passwords is. They’ll either figure it out, or they won’t, but either way it doesn’t matter. Nothing really matters, as long as I don’t have to get up.

With a sense of heightened self-awareness, I focused on a small, dark presence deep within me. It was the Seed of Death. It began to grow. I acknowledged it with a pitiful rattly cough, and it dislodged. It was a snot nugget after all, but it was right next to the Seed of Death.

I ate half the steak and half the potatoes and couldn’t manage the salad at all. Yes, I am surely dying. I will cruise in and out of consciousness, and at some point I will no longer cruise back in. She didn’t want that second beer, Dave will tell people afterwards, and I knew she didn’t have much time left. I just kept her comfortable. 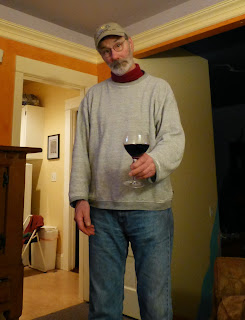 What a nice man. I hope he doesn’t miss me too much. I don’t want him to be sad. With great effort, I unbundled myself from the blankie and staggered up to bed. At 8:30, four hours earlier than usual. Yes, clearly, death approaches.

Twelve hours later I managed to make it downstairs in my jammies and haystack hair and announced myself with a loogie-rattling honk. I’d stayed in bed just to make sure, but I was not technically dead at all. Someone had tied a clatter of tin cans to my lung bumpers. Jesus Christ, are you ever going to stop coughing? Dave said, with a little edge. He won’t miss me too much. That’s good, I think.