Stop And Smell The Putrescine 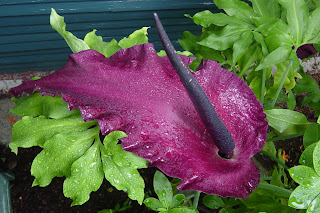 It’s June, and outside in the south garden is the unmistakable reek of a whompingly dead animal. Something large. It always makes me want to go out there and cut one.

There’s no trouble locating the offending object, even if you didn’t have all those flies to follow. It’s in the same place every year. Dracunculus vulgaris is a plant magnificent in leaf and flower, and it’s just the sort of thing you’d want front and center on your dining room table, if only it didn’t smell like extract of dead possum. It’s a gigantic flower, the sort referred to by garden-desigin types as “architectural.” Unfortunately, the building it most calls to mind is the slaughterhouse. I did cut one once, early in the morning before it had really expressed itself, and I put it in a vase and then I went off to work. I think I had forgotten its hidden talents, and I just thought it made quite a statement. Dave had some friends over later and they all heard the statement loud and clear. I got in trouble.

This particular plant was here when we moved in thirty years ago, and it took quite a while to discover its properties. The bloom lasts but a few days and the stink just one. It took a few years just to realize that we didn’t have a vat of dead possums out there. And we’d gotten used to the vultures. About twenty-five years into our relationship with this plant, it started putting out little seedlings, and I’ve taken to repotting them and giving them to my friends. At least once a year, I know they’ll be thinking of me.

I suppose it’s species-ist of me, but I do tend to look down on flies for being attracted to poop and dead things. I understand how the system works, but it just seems wrong. I guess everything is just a matter of taste, but it seems like you really have to draw the line somewhere. I actually draw it just in front of oysters.

There’s already a minor enterprise afoot in sending out a bouquet of dead roses to people with whom you’re quarreling, and I think someone is missing a bet with this flower. You could have one potted up and sent to someone just as it’s beginning to unfurl. Someone like, oh, your congressman. “Thanks for all your good efforts on behalf of the private insurance industry,” the note might say. Or, “Just a little appreciation for your work in keeping the country safe for heterosexuals.” Your congressman will put the magnificent flower in the front office and smile. Until tomorrow.