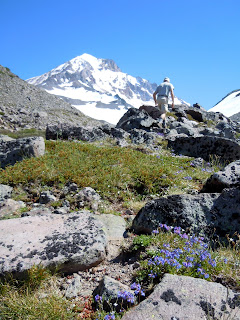 I have a reputation for hauling people on what they claim are unacceptably steep hikes, or “death marches,”  as some prefer. It’s entirely undeserved. For one thing, hardly anyone has died, although one fellow went a little bluish, and several have exerted themselves clear out of conversation, which is not always a bad thing. Also, it is not my fault that we are very near sea level here and all the good stuff is up around 5,000 feet. That’s something you’ll have to take up with whoever was responsible for the Cascadia Subduction Zone.

Besides, people are always finding something to complain about. “Look around,” I tell them. “It’s gorgeous. Try looking at something besides my ass,” and they complain that they would, if my ass wasn’t always right at their eye level. And it’s not true that they keep smacking their faces on the trail in front of them. That only happens sometimes. 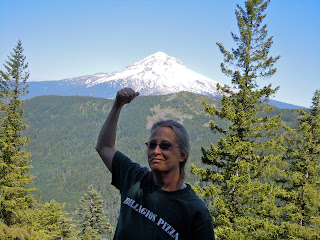 It’s gotten to the point that when my guests ask me what a proposed trail is like and I say “it’s not that steep,” everyone groans and pantomimes shooting themselves in the head. Myself, I rarely remember how steep a hike is. I’m always surprised. It’s the same sort of mechanism that allows women to bear more than one child.

Once people get themselves to the splendid vista with views of volcanoes, the drone of hummingbirds, and drifts of little alpine flowers that don’t grow anywhere else, they hardly ever are moved to push me into the crevasse. They’re secretly grateful, they are, quite secretly, and by the time they have hitched themselves back down the trail–and sometimes that do go awfully fast, don’t it?–and drained a shelf of my beer, they’ve forgotten all about it. 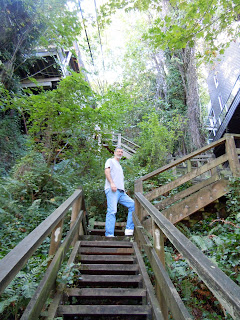 Still, to any of you out there still harboring a grudge about all those magnificent vistas and alpine flowers I made you look at, you will be happy to learn that Dave turns the tables on me on our urban hikes. He walks every the heck where. Frequently by himself, but he tries to entice me with talk of an ice cream cone, twelve miles distant. “Go for a walk?” he’ll sing out, enthusiastic as a cocker spaniel, and if I haven’t had the foresight to make other plans, I’ll assent. “Where this time?” I asked the other day.

“Oh,” he says, voice light, as if coaxing a parakeet to his finger, “I was thinking hill walk.”

This would refer to the West Hills above downtown Portland, the site of my entire postal career. These days, no one is paying me to walk those. We head off. 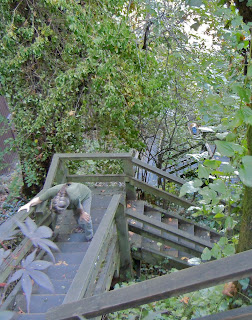 Soon enough we find ourselves at the bottom of a set of wooden steps in the woods. I peer up, but the apex is shrouded in clouds and eagle butts and angel feet. The steps are in good condition, rarely used; Icarus’s younger, timid brother installed them when he got a good deal on lumber. There are little resting benches every thousand feet of elevation, probably thirty of them. We emerge eventually near SW Davenport Lane, and Dave turns to me as bright as sunshine and says “There! That wasn’t so bad, was it?” I have parked my last syllable three or four benches down, which he is counting on. 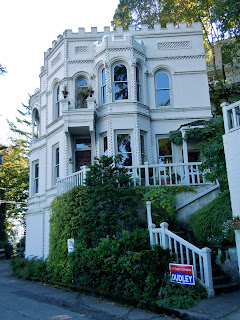 We are smack dab in the middle of the very first route I ever delivered, and I know it well. I have traveled five miles up and thirty years back. It is, in fact, worth the climb, with sights and sounds not encountered in the lower elevations: palatial homes, views of volcanoes, the drone of Mexican-powered leaf blowers, and, blooming everywhere in gay profusion, drifts of Republican lawn signs.