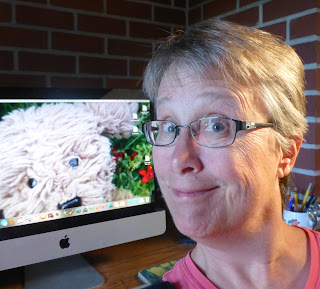 Well, it’s a dang miracle, is what it is. The dude from CenturyLink came out here to hook up our new high-speed internet and fancy TV service and now he’s gone, and every little thing is working. I was cringing for an hour or so in anticipation of the explosion wherein all of my data in The Cloud would rain down and ice up the internetular driveway, and now I’m starting to straighten up. I’m still wary, but it’s looking like a new world over here.

The old world had been a tableau of the stages of grief. We have been learning to accept our losses for a couple years now. That web page is going to be real pokey tonight? Okay, as long as it loads eventually. Not going to load at all? Okay, we’ll shut down the computer and turn it on again and pull the cord on the modem and plug it in again if it buys us fifteen more minutes of acceptable internet speed. Not going to have acceptable internet speed? Everything will freeze up and hang on our computer screen like a museum display of what we used to care about? Okay. Maybe tomorrow. Tomorrow not looking so good? Perhaps it is time to become philosophical about the fact that we are not in control of anything, and recognize the folly of having become dependent on something that didn’t even used to exist. 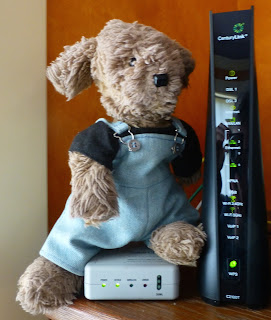 And I could have lived in that old world for quite a while longer if Dave wasn’t such a whinypants. “The computer doesn’t work,” he’d point out, and demand that I fix it, because I know about two more things about it than he does, only I didn’t know how to fix it, because I don’t know how it works when it does work. And I didn’t know if it was the computer or the connection. Or if it was just acting like a savvy old horse who knows when it’s being ridden by someone who doesn’t know anything about horses. I’m just going to stand here and bite grass, it says. You can yank on those reins all you want to and kick me in my massive impassive belly with your teeny weeny feet, but we’re not going anywhere.


But I got tired of Dave whining about the computer, and thus reminding me that I’m an idiot, and when some guy cold-called me to offer me a shinier internet, I went for it. But I wasn’t very hopeful. Especially after I spent two hours on the phone with him about it, mostly on hold. Okay, I’m going to put you on hold here for a moment, while I and everyone I work with go out for pizza, but I’ll be back. Okay, I said. And then I’m going down to the DMV to get my new driver’s license, but I’ll be back right after that. Okay, I said.

And yet this morning here comes Andre three minutes earlier than my four-hour window opened up, and Dave was here to steer him to the basement and crawl-space instead of wrapping wire all around our house, and after an hour or so he pops up and declares us wireless, which means the fairies are now in charge of toting our emails and such, and he punches in a wireless code, and sure enough it doesn’t work. But he hmms and hmms some more and five minutes later he’s found the virtual cord to my old internet service and snipped it in two, and everything worked, and it’s still working. So is the TV.

“You can pull the plug on that modem–you don’t need it anymore,” Andre said, and I held my breath and pulled, expecting the tinkling sound of data crashing out of the ether, but nothing happened. If I shut my eyes, I can almost make out the fairies, with their CenturyLink overalls and their little names stitched on their pockets. I can almost hear them buzzing. It sounds like tinnitus, but without malice.