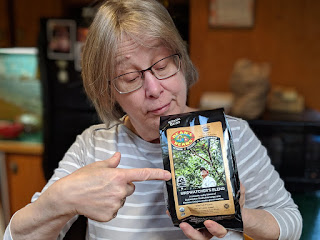 There’s a lot of stuff we can do better as individuals. We can drive less, or not at all. We can avoid plastic. We can quit eating meat. The only problem is, basically, as modern humans, every single thing we do is screwing up something. Massively, in all likelihood. The whole system’s going to have to be done differently and some things not done at all, and it will take a mind-blowing catastrophe to get everyone on board with that, let alone the powerful.

The efforts of individuals are so inconsequential that it’s easy to get overwhelmed. I’ve got some good habits and am working on picking up some others, but I’m still a net disaster for the planet.

But it seems important to try, even if a state of purity is unreachable, and so I have instituted my own personal cap-and-trade system. Cap-and-trade is that deal where a government–say, California–decides just how much pollution it’s willing to tolerate, and assigns permits to polluters, who are expected to reach reductions in pollutants either by buying permits from some entity that realized efficiencies and wasn’t using them, or by polluting less. It’s a market system designed to lower overall dreadfulness. My own personal cap-and-trade system regulates virtue. Mine.

Here’s how it works. I determine just how much I can stand to screw up the environment and give myself that many permits with an eye to eventual reduction. The unvirtuous me really, really wants to take long, hot showers. So it does, citing the fact that the virtuous me has quit using the clothes dryer altogether. The unvirtuous me still likes meat and cheese, so it continues to eat it, pointing out how often the virtuous me bikes or walks instead of driving.

The Virtue Index can change on a daily basis depending on the amount of beer consumed and the (related) number of shits given. It can change depending on how many young, earnest, attractive, aromatic hippie children show up at the door asking for my signature and a check for something virtuous. The first three every month score. The fourth, who might represent the most laudable outfit of all, has unfortunately exceeded my virtue dollar saturation point for the month. I have a house and a cabin that use different electric companies; for one of them, I pay more for the electricity to subsidize their green-energy output, so for the other one I don’t. Never mind that I have a house and a cabin and could certainly afford to pay the premium electrical rate for both: these are cap-and-trade chips, baby.

But none of this is fair. I shouldn’t buy bananas because of the fossil-fuel cost to transport them; but I don’t even like bananas. It shouldn’t count in the virtue index. And if we’re being honest here, that business of getting rid of the clothes dryer turned out not to be such a big deal either. I know, it surprised me too.

Really, the only thing I can say for myself at this point is when I do pick up a new habit, it stays picked up. With that in mind, I announce my next new habit, much delayed. I’m buying bird-friendly coffee. If you are already peeved at the crows rawwking away at dawn when you’re trying to sleep, rest assured this has nothing to do with caffeinating crows. But bird-friendly coffee is a really good way to put your money precisely where your mouth is. It’s direct. It works. It matters.

When you buy coffee certified as Bird-Friendly by the Smithsonian Migratory Bird Center, you are patronizing a coffee farmer who has agreed to leave the canopy alone, or nearly so, and grow coffee in the shade of a diverse forest. Most coffee is grown in plantations of coffee trees created by razing indigenous forest, a monoculture that does not support migratory bird life or most any other life, and (as is typical of a monoculture) requires pesticides and fertilizers to maintain. They get more beans per acre that way. The Smithsonian certification also guarantees a good market rate for their farmers so they are not tempted to clear their land to gain more coffee beans. This is freakishly specific. This is not lobbing monthly donations toward a good outfit that you hope is doing the right thing and not wasting too much. This is your money on the line, riding a dart right to the heart of real virtue. We want good coffee that doesn’t wreck the environment, and we also want the farmers to be fairly compensated for it: we pay a decent rate for it.

I haven’t done that, even though I’ve known about it for years. I’ve bought Costco bags of beans, three pounds at a whack, sealed in plastic, for approximately no money at all (that’s where they hook you), and mine says “Rainforest Blend” on the plastic wrapper, so that people like me who are running a personal cap-and-trade program on virtue can pretend it’s okay. It’s not okay. It’s like buying Fiji bottled water because it says “Earth’s finest water, bottled at the source, untouched by man.”

I don’t care what else you eat or drink. Bullshit is not good for you.