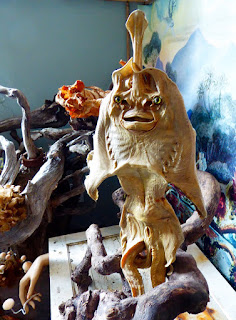 Jim Stewart is a lucky man, but not just because he has a Root Worm living above his garage. This is Portland. People are pouring in and rents are unaffordable and a lot of folks are falling through the cracks, and if you have a room above your garage, odds are you’re going to get a Root Worm in it sooner or later. And all of its friends.

Mr. Stewart is the chief instigator of the Zymoglyphic Museum, located in a room above his garage, in which are displayed numerous examples of artifacts from the Zymoglyphic region, such as that root worm. In fact, Jim probably has a corner on the market. The Zymoglyphic region exists at the intersection of the whole world and the space between his ears. He apparently began collecting museum-worthy items as a boy, and the discovery of glass eyes and glue set him on his current path. The thing about the Zymoglyphic is it’s real easy to overlook, for most people, until you start noticing it. And that’s what makes Jim lucky. Noticers are acquainted with joy. 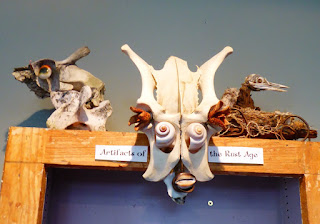 He’s lucky because he can go anywhere and find Zymoglyphic curiosities, and most people can’t. Some people can get a little bump out of life by trolling the thrift stores for salt-cellars, or tin boxes, or thimbles, giving them that narrow but true joy of the collector, but Jim is a generalist. Which makes his joy broad in the beam. 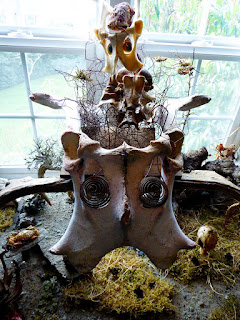 I remember going on scavenger hunts when I was a kid, and it was a gas. It’s hard to understand why it’s so exciting to find and check off the items on the list–a feather, a rubber band, a clothespin; after all, many of us spend large parts of the day trying to find crap we know we put down somewhere and we can get pretty cranky about it. But scavenger-hunt items are random and irrelevant to anything but the hunt itself, and it forces us to look, and to see. To notice.

We have wonders all around us, yet many of us maintain a tedious existence merely by failing to notice them. Noticing is a habit we can develop, though. That’s what birders do, after all. These are merely people who have learned to pay attention to what is all around them, and any minute, anywhere they go, a choice rarity might drop by. Feather! Rubber band! Clothespin! If you’re not somewhere with a lot of birds around, you should really move. It’s not good for you.

Unfortunately, many people believe it costs money to enjoy yourself, and what with one thing and the Republican party, that means they’re out of luck a lot of the time. But the best things in life have always been free, and certainly everything in the Zymoglyphic museum was. Dioramas of creatures from the Age of Wonder; conglomerations from the Rust Age; all Zymoglyphic artifacts began as noticed objects, requiring some assembly and reanimated by intuition. Here’s a fungus that is lacking only its eyeball; there’s a swashbuckling lichen two seed-pods and a leaf gall away from full sensibility. When you’re scouting for your museum, you’re not wondering what’s wrong with your knee. You’re not worrying about the performance of your portfolio in a downturn. You’re alive. You’re curating your own enthusiasm.

And in the Zymoglyphic Museum, even the dust is archival.