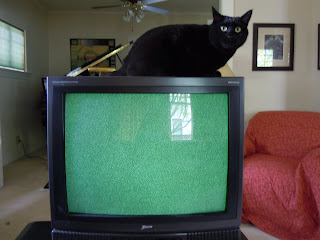 If you want to know what’s on the TV around here, it’s usually Tater. As a television, ours is a really good cat heater. Tater likes to watch videos on the computer screen, preferably while sitting on the nice nubbly keyboard, but even she won’t watch our TV. It might well be the crappiest TV in America. It’s old. If you come over to watch football on our TV, the game will always be between the dark green uniforms and the even darker green uniforms. The players will be wearing leather helmets.

There must have been a time this TV was new. For a while there we had new TVs all the time, due to our frequent contributions to the street-drug and window-glass trades. I do remember Dave coming home with this one. Neither of us likes shopping. We’re liable to snap up the one closest to the front door in the store; there will have been no consumer research involved. We grab and go, knowing our purchase will instantaneously lower the price of the same item in stores all over town. So Dave went out to fetch us a new TV with the same attitude he might replace butter, and whichever salesman was closest to the front door was in luck, unless he screwed up. This one screwed up.

Dave was standing between two televisions, a thoughtful expression on his face (“eeny-meeny-miney-mo”), and the salesman came up to offer assistance. “Well,” Dave started, and the guy said “you don’t want this one.” He pointed.

“I don’t?” Dave said. He didn’t, actually. The other one looked a little better.

“No. This one still has rounded corners on the screen. They’ve gone over to square corners now, like this one.”

Dave gave him the drilling stare, to which he was immune. “So you think I’ll be missing a lot up there in the corners?”

Dave is old. Unwittingly the salesman had just provided Dave with a reason to buy the old-style TV. Dave distrusts newness on principle. Dave also dislikes doing something just because that’s what everyone else is doing. That’s why he stayed registered a Republican forty years after he voted for his last one. If you want him to quit wearing something, tell him it’s fashionable. Dave took his business elsewhere. He came home with a new TV. It had square corners, but nobody at that store pointed it out.

When I was little, our family was several years tardy picking up our first TV, but when it came, it thudded into the house and squatted heavily in the corner. It was a massive piece of furniture with a screen embedded in the center like a navel jewel in a plump belly dancer. When you turned it on, you could hear the electrons swarming. A star would appear and then nova into Donna Reed. We didn’t watch it much. Back then TVs didn’t run that many hours or on that many channels, and ours got fewer hours and channels than most, because Daddy was our never-remote control. Mickey Mouse never squeaked in our living room, because Daddy thought Walt Disney was a fascist. Later, Mission: Impossible was banished after one viewing, because Daddy didn’t approve of cheering for a CIA-facsimile to infiltrate foreign countries and conduct secret operations. Hogan’s Heroes were out because Nazis weren’t funny. It’s a wonder I didn’t rebel my way into the right wing.

TVs got better. Some families that were not ours got remote controls, and then they started coming out with color sets. “Do you want your children to grow up thinking baseball is played on gray grass?” went one advertisement. Already, the notion of punting the kids outside to roll on their own lawn was getting quaint.

When I was in college, someone brought a significantly better TV back to his apartment. It was amazingly clear. It was a Sony Trinitron. Soon, all TVs were that good. Now, they’re all so amazing they can even refill your chip bowl. The actors can pitch Chex Mix into your slackened jaw. Soon, they’ll be able to check your insulin level and speed-dial the ER.

Our TV does have a remote control, and sometimes it will change the channel for you if you’re really precise with your thumbnail, but you can’t turn it on or off with it, or mute or adjust the volume. We had a TiVo once but the TV slit its throat in the middle of the night. The whole screen is dark, and if you’re watching one of those dramas that takes place in the alleyways at night, it’s more of a radio.

But it’s not dead yet, and we’re keeping it. There is a neat diagonal striping down the entire face of the TV at all times, like a Mad Men tie. Call me fancy, but I’m hoping to achieve argyle. 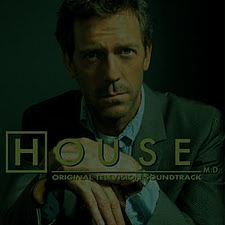 Late-breaking news: mere days after this post was written, nephew Michael came over with his old TV because he bought a better one. Dave accepted it with gratitude and regret. He is a faithful guy, and he had hoped to be watching the old one when it blew up, but even he admits the new one is a big improvement. I discovered that some of my favorite shows are not deliberately edgy and dim, and Dr. House’s gang does indeed do surgery with the lights on. I like it. At least it’s not a flat-screen.