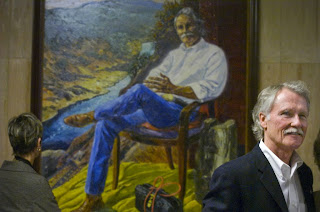 Breaking news: former Governor John Kitzhaber will be taking off his jeans at his upcoming debate in February. Spank me! This was on the front page of The Oregonian, as well it should be. Mr. Kitzhaber is easy on the eyes, and I can’t be the only reader who might want advance notice of the event.

Our former governor is famous for wearing jeans at all times, even with suit jacket and tie; he was sworn in wearing them. They are invariably referred to as his “signature” jeans or his “trademark” jeans, or (as in this more in-depth article) both; they’ve been deemed newsworthy for a long time. He’s running in the Democratic primary again this year, even though he’s been out of politics for several years. He was an emergency room physician and has worked on the state and national levels for universal health care while both in and out of office. He’s a serious dude in trademark jeans. They’re actually statesmanlike, compared to what the newest Massachusetts senator wore in Cosmopolitan magazine. Still, if he’s taking his pants off, I wouldn’t look away. 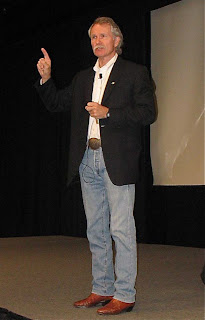 Oh wait. It’s just that Kitzhaber will be debating his Democratic opponent at the Oswego Lake Country Club, which has a dress code prohibiting jeans. It’s a puzzler: do you keep your distinguished guest out, or do you bend the rules? They decided not to bend the rules. The debate is only weeks away. Whatever will they do? What if Kitzhaber doesn’t read the front page of The Oregonian? Isn’t there some way someone can get the word out to him in time? If it came to that, the general manager of the club said, they do have some spare slacks to lend the ex-governor should he show up in his Signature Jeans. But who wants to wear the club’s Common Pants?
Oh wait. Right there, fifth paragraph down, it turns out that Kitzhaber is aware and respectful of the rules after all, and owns his own pair of fancy pants. He said he had to have them to visit the state prisons, which require that guests not dress like the inmates. So it would appear that the panic is off. This should free up some space in the paper for items of interest to Oregon voters. There are some. We have a tax structure so unstable it could barely hold up a good idea. Our kids have to grease up to all fit in their classrooms, and the school year is currently scheduled to peter out after Groundhog Day. We have unemployment soaring, in some timber communities cresting 100%, counting the children that haven’t been born yet. So there’s stuff to report. I’m sure the folks running for governor will have a serious conversation about all of it. 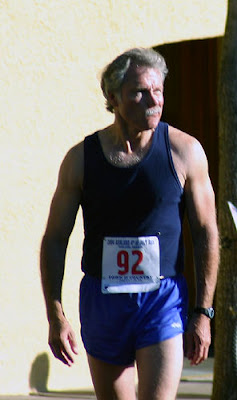 Oh wait. Eighth paragraph: one of the Republican candidates is a member of the country club. “If I don’t get to wear them,” Allen Alley says of the jeans, signature and otherwise, “he shouldn’t get to wear them.” Sweetie? He won’t. He’s got his own pants. Find another issue. We’ve got problems to solve.
I’m not sure, but I’ll probably vote for John Kitzhaber again, after careful consideration of the issues of the day, and for the same reason I voted for him the first time. That man is totally smokin’ walking out of a room.
By Murr Brewster|2021-11-09T21:30:49-08:00January 27, 2010|Uncategorized|11 Comments