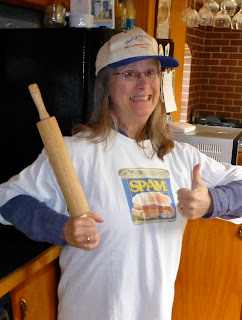 Great time over at your house the other night! Sorry about Little Earl. Kids! They’re so curious at that age. And clumsy? I don’t need to tell you! LOL!!!

Anyway I’m just writing to thank you for the Marionberry-Blueberry pie recipe. Best. Pie. Ever! I couldn’t find any marionberries, but I did get plenty of blackberries from over there behind the sewage treatment plant–SO juicy. And I thought I’d go ahead and substitute huckleberries for the blueberries, because I picked a bunch a few weeks ago. Not the sweet blue ones, the red ones. Nobody ever picks those for some reason, that’s why I was able to get so many. They’ll put a pucker on you, that’s for sure. I like them in my pancakes, they’re like little tartness bombs going off. You put a mess of red huckleberries in your pancakes, and man, it makes you appreciate the pancake that much more! The parts in between the huckleberries. Anyhoo.

So I really don’t know what you mean by “two dry pints berries.” What’s a dry pint, anyway? I mashed up the blackberries real good and sopped them up between a bunch of paper towels, so I hope that was good enough. Didn’t bother with the huckleberries, they’re already like little BBs.  Did you really mean to say “juice of two lemons?” That’s a lot of lemons. I guess it makes sense if you’ve got sweet berries, but I got to thinking, I thought, Marly June? Maybe your berries aren’t really sweet so much as they’re a little ornery. So I put in Kraft caramels instead. And that yummy crust? So I didn’t actually have as much butter on hand as you called for. I thought we had some Crisco, but we must have gone through that the night Earl came home from his convention. Uh oh! Did I type that out loud? Ha ha!

Anyhoo. So the crust called for two eggs, and mine were only large, which as you know is the smallest size they come in, so I thought, Marly June? You might just as well put in three, and since I didn’t have as much butter as I needed I put in a fourth just for bulk. I must say the dough came out kind of soupy, not that I’m blaming you or anything, LOL! So I had to put in a little more flour until it stiffened up. Unfortunately I ran out of flour before I’d gotten it where I thought it should be, so I threw in some garden lime, and then that puppy just stood right up and barked. 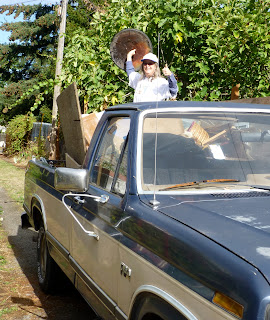 I’m such a silly goose, though, you know me, I didn’t even notice that the recipe was enough to make “two thick ten-inch pies,” and my pans are all nine inches. And just between you and me, not that your pie wasn’t the Best. Pie. Ever!, but I’m not all that big on thick pies since the volcanic cobbler incident. The kitchen never really was right after that one. We just left the oven door open for a few nights and let the mice take care of the worst of it. So then I had this terrific idea: why not make one really big thin pie? Since I had all the filling and crust made up. So I “did the math.” I love that expression! What I mean is I kind of guesstimated with my hands what two thick ten-inch pies put together would look like, except thinner, and then I hunted around for a pan. That’s when I got my big inspiration. Garbage can lid! I know, right?

I had to roll the dough on the floor, because it wouldn’t fit on my cutting board, but it transferred like a dream. First time I’ve ever regretted getting that shag carpet, but we could all use more fiber, Earl especially. LOL! Slid in the berry filling, and the tapioca for thickener–oh, I didn’t have quite enough tapioca, and I was a little worried about that, the last thing I want is for the juice to gang up and lurch out like before, so I just laid in a couple dryer sheets in the middle to give it some structure, and we were good to go. Well! I’ll bet you can see what comes next. Sure enough, the garbage can lid was just a little bigger than my oven, but only by a couple inches, it was so close. I don’t mind telling you I was miffed, but I’m not going to be outsmarted by a giant thin pie. I closed the oven door as much as it would go and then tented it around the edges with tinfoil. Wallah! 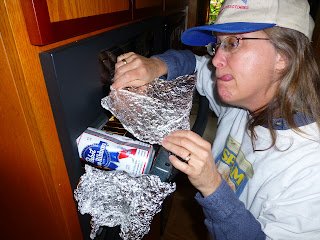 Well, the tinfoil didn’t work all that well and the oven never really did get up to temperature. I checked it every hour for a while but it was taking its own sweet time baking up, and man but the kitchen got hot! Ha ha! We decided to just mix up a bucket of margaritas and wait it out on the patio. You know, we could argue the rest of our lives whose turn it was to check the pie, but the important thing is we did wake up because of how chilly it got, and also the sirens.

Anyhoo. Little Earl is thrilled that we’re camping in the back yard now. The things he finds and drags into that tent! LOL! And I just want to thank you so much for the recipe. I’m sure that pie is going to wear real well and last us a good number of years, even more if we can get it re-soled. Dinner at our place next time? Just say the word!

Thanks to John D. for the recipe. Really. Best. Pie. Ever.