Thanks For Coming, We’ll See You All Next Year! 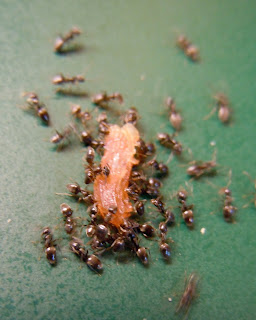 The 2010 Ant Convention has been a roaring success, all members polled agreeing that the Brewster-Price kitchen is the perfect venue, with its variety of entertainments just steps away. Routine business was conducted as usual in the grains pantry, but things really got hoppin’ in the sugar drawer, and satellite parties scouted out the jelly cabinet. Edith Pilaf and the Honey Dippers came back for an encore performance in the fruit basket, where the conga lines stretched over the counter. The screening of “Borax: Fatal Attraction” was not well attended, but all in all, satisfaction was rated at high and all involved agreed to meet again next year.

As one of the two managing proprietors, I am always a little amused to see my guests troop in every year, at least for the first five or six weeks–reaffirmation of the rhythms of life, and all that. Still, it gets me wondering. Why this time every year? Why spring? I’m just as likely to have counter schmutz all year long, but the ants show up only in spring. They’re amazing. I can wipe down every surface and clean up the goo around the jar-tops and get the place sparkling, and see no ants for a day. None. And then suddenly they’re all back. In spring, I can locate an avocado smudge the size of a nail clipping from across the room just by scouting the kitchen for ant eruptions. It’s like how you can locate a teenager on Facebook by looking under the pile of exclamation points.
So I asked Dave: what is it about springtime that makes the ants show up? It’s warm, there’s plenty to eat outside, what’s the deal? I don’t expect him to have the answer; I’m just reaching out with random communications the way happily married people do. Of course, he will have an answer. It never occurs to him to say “I don’t know.” He’s going to come up with something. 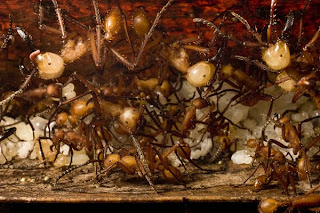 I’ve always wondered about things. I remember staring at ants a lot when I was a kid. We didn’t have TV. We had a brick patio out back and the ants lived under it. I always assumed that ants lived in little sandy cones. They’d come out of the little hole in the center, each with a grain of sand, and drop them on the rim, until they were piled up with the perfection of the Pyramids. I was curious, but not a particularly logical thinker, or I would have also taken in the fact that I never saw an ant come from outside the hole and place a grain of sand on the cone. Obviously this was just the debris pile of their excavation process, but I thought the cones were their home, and they’d done a nice job of it.
At approximately the same age, I got in a heap of trouble for digging up the lawn in the back yard. I was looking for gravity, which I had visualized as a little layer of pebbles about a foot below the surface. I probably had conflated “gravity” and “gravel,” and I explained the point of my exploration, but I got in trouble just the same. With that kind of support, it’s amazing I ever pursued a science degree. On the other hand, my father had vocally despaired of my ever learning to write, so maybe it was the path of least discouragement.
Anyway, I’m still at it. I went ahead and asked Dave why ants just show up in the spring, and he waggled his eyebrows and made a lewd humpa-humpa gesture meant to serve as a complete explanation. When it comes right down to it, that’s his explanation for a lot of things. 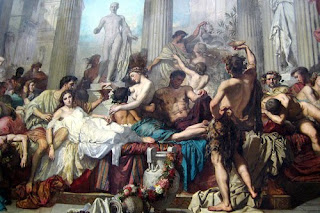 For whatever reason, with or without the placement of borax traps, the ants will pack up and leave soon enough. They have to. In June, we’ve got the place booked for the Fruit Fly Jamboree.
Note: If you didn’t care for this year’s ant post, you could try last year’s ant post. Worth a shot.
By Murr Brewster|2021-11-09T21:28:25-08:00May 29, 2010|Uncategorized|34 Comments