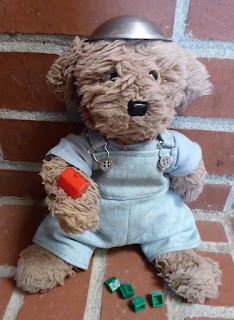 I don’t know what’s more alarming: that a house should suddenly go missing, shed to shingles, or that I can’t remember what it looked like even though I walked by it all the time. But no matter where you go in this neighborhood, or how often you stroll by, you’re going to run into gaping craters where a house you should remember has been deleted, like it had been taken out by a comet. It’s all so sudden. Just a hole in the ground, and a porta-potty, and a radio set to a Spanish station, and then you turn your back for a few weeks and there’s a big shiny house in one of three neutral colors and a Sale Pending sign. 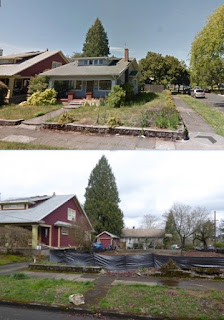 It feels like Monopoly. You pass by a little green house and by the time you make it around the block again, there’s a big red hotel instead. Pluck off, plunk down.

Monopoly wasn’t one of the games we had at my house when I was a kid. I got introduced to it somewhere else. And in all these years, I’ve never come close to winning.  I feel that little burst of optimism when I put my game piece on GO and then it’s all downhill from there. At home we had games like Parcheesi. You’d roll the dice and move your pieces just that many dots and no more, and there was an opportunity to jam things up and get in people’s way, which, as a small child, appealed to me. That was the limit to the strategy, as I recall. 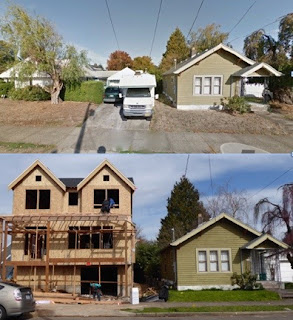 But at my friends’ houses, I’d get all set up with my play money, and my game piece, and I’d fly past the railroads and the tan streets to buy Illinois Avenue or Pacific, reasoning (in an early foreshadowing of my investment acumen) that I liked red and green, and things would progress a bit, and then all of a sudden some kid is horse-trading. “I’ll give you this, because you really really need it, and you give me that and that and all that there and most of your cash. C’mon, that’s fair, isn’t it?” No! That makes no sense! The price is right on the back of the card! You can’t do that! That can’t be in the rules! I’m telling your mom!

But they could, and they did. 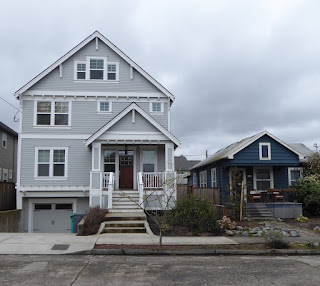 I’m still not over it. Things shouldn’t just cost what the richest person is willing to pay; people shouldn’t have to sell stuff because they’re losing ground in some spooky ethereal market. The Art Of The Deal is a dark art. There’s nothing wrong with the little green houses around here. But because money is thundering into this town at this time, it’s thought to be a smart thing to take out the little green house and put in a big red one, and the same number of people will be living in it, but they’ll be richer, and so will the development company in charge of the comet.

As a result, Dave and I are sitting on what could become a comfortable pile of cash, and we didn’t do a dang thing for it except buy a house a long time ago, just to live in. It doesn’t feel right. Mediterranean Avenue should just be $60. And there was no reason to take away the thimble.