That’s No Skin Off My Squash 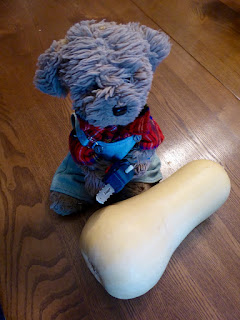 How hard can it be?

Butternut squash soup. Hearty, delicious. You have to figure there’s liquid in it, and butternut squash, and you need to render the vegetable soupworthy somehow, but hey: it says “squash” right in the name. In other words, it practically makes itself.

So. Here we go. Peel and cube the squash, add broth and a few other items. I thump the squash onto a cutting board and commence peeling.

Remember that dumb old allegory about the dove that rubs his beak on a boulder once every thousand years and when the boulder is reduced to a grain of sand, one day in Eternity has passed? They could totally have made the same point using a budgie and a butternut squash.

Because Lord love a duck in springtime, the peeler doesn’t penetrate the thing at all. After a few minutes, I discover that although I have not persuaded the peel to liberate itself in any way, I have got a real nice polish on the squash. After a half hour investment and the removal of several of my favorite layers of knuckle skin, I’m most of the way there, but I’m starting to have flashbacks on the disastrous wallpaper removal project of 1983, a.k.a. the Confetti Situation.

The internet, consulted afterwards, recommends stabbing and microwaving the sucker into submission before attempting to peel. I’m all for violence when it comes to vegetables; it takes the sting out of them not being pork. I’ll try it next time. It does occur to me that something involving a garbage can and small explosives might take care of the peels and the dicing all at once. 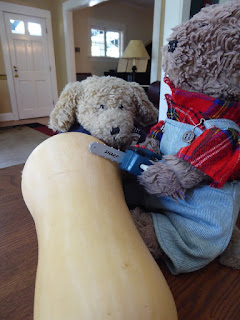 You really can’t trust vegetables. I tried a mango recipe once that suggested, in a bland way, I remove the skin and then remove the seed from the fruit. As it turns out, this is really hard to do when you don’t know what’s in there. Is it like an avocado pit? Is it like an apple core? It is like neither of these, or anything else I’ve ever seen. It takes up an undeterminable amount of space inside the fruit and is shaped like old soap. I gave it a whirl and then realized I was inviting Mary Ann over for dinner. All I had to do was get the rest of the salad ready and then say “Mary Ann, do you have any idea how to persuade mango meat out of one of these things?” and she would not only have one idea, but several, including an assortment of hacks she’d read on the internet and had always wanted to try. Mary Ann has a whole closet of hacks in her brain, all accessible and ready to roll. And then you hand her the mango and she delightedly–delightedly, I say–does the deed, to perfection, trying her latest hack for the first time, which involves rubbing the mango along the lip of a drinking glass.

I remember that much. I don’t know how it happened, though. Rubbing a mango along a drinking glass seems just as expeditious as taking your pants down using the toilet seat lid. But she did it. I added a note to my recipe: “Wait until Mary Ann is coming for dinner.” That might go on the butternut soup recipe, too.

I still am not certain why a butternut skin should be so tenacious, especially in a house where the paint exfoliates itself and porcelain chips fly off the sink. But I’m alerting NASA. If they had only used a butternut skin for the Challenger, Christa McAuliffe would be president today.