The Beer From Here 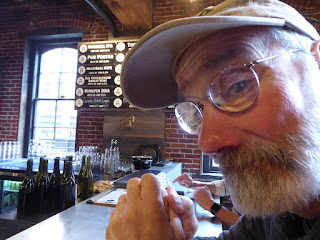 Every year I scour my annual credit card statement looking for hidden items my tax preparer might be interested in. You never know. I’m forgetful. I may have suffered an involuntary donation. Or had a dependent child all this time. Or went blind. Or maybe the cat can be depreciated. She’s not getting any younger.

What really struck me this year is that if my credit card is any reflection on my discretionary spending–and that’s pretty much what it is–all I did with my pension was (1) piss it away and (2) turn it into shit. That’s right. I didn’t buy any things. No new furniture. No clothes. No car. No gadgets. Dave got some shoes but that’s to keep him from wearing his feet down to little ankle stumps. He walks a ton. Nope: everything we bought we either pissed away or it turned to shit. 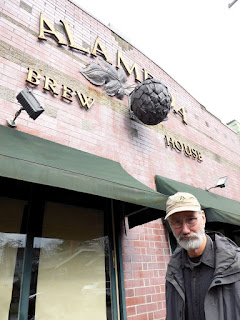 We love great food and great beer. And we happen to be in about the best town in the world for it. I will re-use Kleenex and save seeds and stick extenders on my pencils but my wallet shoots wide open for really nice food and beer. I like that it employs my fellow citizens too. Our money goes sideways and around and around, and not to Jeff Bezos.

Beer has been really good here for about thirty years. With your first swallow you can tell that your beer is instantly embarking on a search-and-destroy mission to locate and eliminate pockets of unhappiness. There are many people who think this is a bad thing. They say, in fact, that alcohol has many untoward effects such as shriveling your brain, enblobbening your liver, shredding your stomach lining, making your heart all stretchy, pitching a tent in your pancreas, and ruining your relationships. And all of this is even egregiouser if you’re a small female. But they’re basing this on nothing more than rigorous scientific inquiry, exhaustive longitudinal studies, and peer-reviewed medical research, whereas I hold that it is entirely possible I am the “exception that proves the rule”–a sound principle that I know is scientific because it has the word “prove” in it. 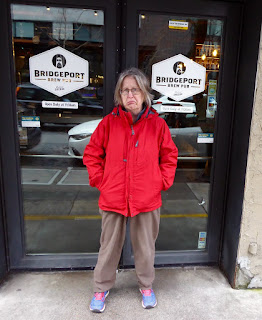 Besides, it’s not all about the buzz. I don’t drink Budweiser–I’m not an animal.


We were quite taken with Bridgeport IPA when it came out in the 1980s. In fact, it seemed to solve almost everything. Bridgeport was a pioneer that put hoppy beers on the map and won a bunch of international awards with them, too. They were kind of the Big Daddy that got it all going. But then smaller breweries started up. Roots Brewery was a revelation: their organic IPA solved problems I didn’t even have yet. Then one day we showed up at their pub and the place had just folded up. No warning. It was awful. 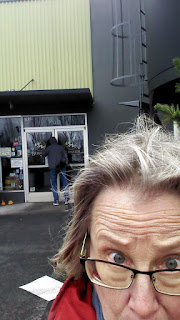 But soon after came the Burnside Brewery, which made tremendous beer AND food (smoked trout deviled eggs with flying-fish roe and dill vinaigrette? Come on.) AND was located in the exact right spot to get refreshment on a twelve-mile city hike and still leave a nice contemplative hour for walking home. If we only wanted to go a couple miles we could pop into Alameda Brewing. And of course even if a place doesn’t brew its own beer it still maintains a zillion taps for people like us–there are probably seven such establishments within three blocks of our home.

But cue the shark music. You know those stories where a bunch of people are stuck on a moving train and one by one they either (1) disappear or (2) get really nervous? We’re getting really nervous.

Burnside Brewery just up and closed, lock, stock, and deviled eggs. Their employees were as surprised as anyone. They’ve still got a silo of beer out front. Alameda Brewery just shut down. And now Big Daddy Bridgeport is closing too. Suddenly this town is awash in unemployed barkeeps. 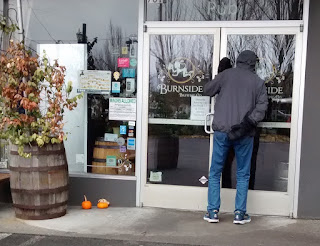 I’m mentally prepared for invasions of climate migrants. The collapse of fisheries. The insect die-off. The end of air travel. Extinction. It’s not easy, but in the face of all this I am able to keep breathing in and out because of a few key tricks of perspective: (1) the insignificance of our globe in the universe, and (2) my own imminent demise. I can keep my cool.

But it’s going to be a lot harder without beer.