As my niece told me, pokeweed is invasive–so much so that it has now outrun Wikipedia, which thinks we don’t have any here. It’s planted by birds. Birds are unaffected by the seeds and so they eat them and poop them out and fly to a branch and smile wickedly at us. It’s an inward smile, on account of the beak situation. They’re smiling because pooping out toxic plants is their plan to get back at us for letting our stupid cats out. And for pesticides, and windows that look like sky, and tidying up our gardens so there’s nothing to eat, and climate change that’s throwing off the insect hatch, and mountaintop removal, and all that there.

We don’t like invasive species, officially, even though we’re responsible for most of them. Some of them chew up all the plants we really like, or choke off the fish in lakes, or outcompete natives, or otherwise throw everything off balance. Even the ones that appear harmless, like the plague of ring-necked doves, can be very disruptive to the musicsphere. All hoo-hoo, hoo-hoo, all day long, like some crappy avian New Age music that they play in the naturopath’s office that’s supposed to calm you down and totally doesn’t. Somewhere in Florida right now there’s an escaped tropical pet bird with constipation heading this way with a load of kudzu seeds and a pair of stowaway Japanese beetles. Invasives! Bleah. We hate them.

That might be what psychologists call “projection.” After all, the worst invasive in the world is us. The glaciers held us in check for a long time, but once they pulled their icy lips back off the marble, we invaded like crazy. Look, there’s a nook! There’s a cranny! Let’s jam ourselves in there. It’ll be right roomy once we wipe out all the big scary animals. Heck, we can use this entire middle part for growing Cheez Doodles if we shoot all the bison that are stomping on it. And their bones are so much fun to stack up. 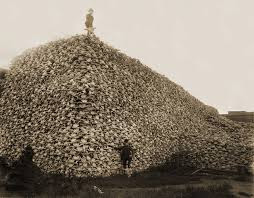 We can’t get enough of invasion. Even now we’ve got people absolutely incensed that some of the real estate has been pulled off the market, like our parks and refuges, because all that wasted land could be used to make hamburger or toilet paper or money. We assume we own every little thing and then we treat it like we can always get more.

But right about now the world is gathering up its forces. There’s anthrax thawing out in Siberia. There are viruses auditioning mosquitoes and chickens for hosting rights. There are droughts spreading and people moving toward diminishing sources of water and we’re bombing each other over the goodies that are left. The sea is rising and sending little fingers into the coastline. That’s the earth feeling along the ribs, looking for the sternum and diaphragm, and when it gets a good grip it’s going to Heimlich us out of here.

The earth won’t last forever, either. The sun’s getting brighter, and the oceans will evaporate, and the tectonic plates are going to grind to a standstill, and the planet’s going to get a good wobble to it, but it’ll still be a cushy ride for another billion years or so, plenty of time for a do-over of the species list. Maybe it will even come up with something like us, with an ear for music, prehensile antlers, a handy pouch, and two tails to send mixed messages with. Maybe it can whomp up something really smart. After all, it only took about sixty million years to score a human being out of a basic shrew. Smart’s okay. Wonderful things have been created by smart humans.

And maybe next time the Smart won’t have enough momentum to outrun the Wise.