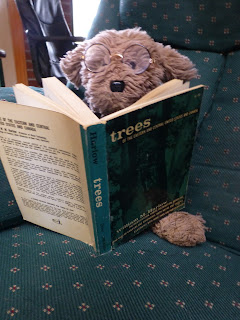 The biggest tree in my yard needs to come down. That’s my opinion, but it might not be the opinion of the City of Portland, so we just dropped off our application for permission to remove it.  The application ran to four pages. They wanted color glossies of the tree. They wanted its size, weight, lipid profile, zodiac sign, and likes and dislikes. They wanted to know exactly what I intend to replace it with. They wanted a site map showing location of the house and all the trees and which ones are staying put. I drew that up in two colors for extra credit. I want to get a good score.

On page two of the application, they want to know why I want the tree to come down. I want it gone because it’s a stupid tree and I hate it. I didn’t put it exactly that way, but it’s true. I could have planted anything fifteen years ago when there was nothing in the yard. And I read up on trees, but I missed some clues somewhere. It’s like how people make little lists of what they’re looking for in an ideal mate: handsome, well-educated, sense  of humor, likes to socialize, picks up all his acorns, that sort of thing. The only thing I wanted was a tree that would get nice and big in a hurry, and that had a deep root system that wouldn’t interfere with anything I planted under it. Scarlet Oak seemed to fit the bill.

But the problem with making lists for your ideal mate is you never really get the whole picture. And there you are stuck with a handsome well-educated funny mate who makes these excruciating juicy noises whenever he eats until it could drive you right up the Great Wall of China and into the arms of a vicious, yet somehow attractive, Mongol. 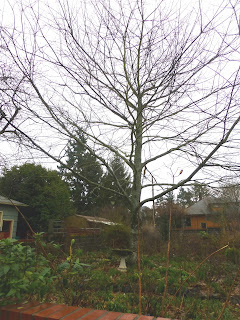 This tree got big in a hurry. But it’s not the right kind of big at all. The branches go straight out horizontal, for like miles. It’s on track to shade the entire yard and not just the half I had in mind. Here’s where the stupid comes in. Those horizontal branches do not have twigs and leaves on them. They have nothing on them until they get to the very tips, miles from the trunk, and that’s where, with great reluctance, they eke out a few petulant leaves. A petunia patch probably sequesters more carbon. If you look at the tree from the street, it looks like a big leafy tree. But it’s an empty shell. It’s all shade and no habitat. Birds hate it. If birds liked it, I’d keep it, even though.


In the part of the form where I was supposed to say why I wanted the tree down, I wrote a lot of stuff about native plants and bird habitat and threw in words like Diversity and Density and I might have intimated my tree was in favor of coal trains, big banks, and the assholes in the Malheur Wildlife Refuge. I said I wanted to replace it with not one but three native Socialist Democrat vine maples and a spotted owl. They still might say no.

At which point I will look at it sneering at me, and I will think I brought you into this world, and I can take you out, while trying not to think about Bill Cosby. But I won’t take it out. I’ll keep the stupid tree and feel glad I’m in a community that cares about itself more than it cares about any one lone cowgirl and her stupid mistake of a tree. I think, mostly, things work better that way. I’ll keep the stupid tree.

Then I’ll blast it with a liquid suet cannon and crust it over with thistle seeds. Maybe hang up a little bell and a mirror. If it dies, it dies.