The Case For Hibernation 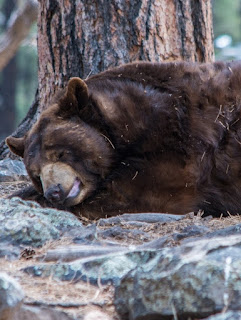 I don’t have anything against winter, but hibernation seems like a terrific idea to me. I am really attracted to any protocol that involves major gluttony followed by tremendous sloth. Pride, envy, greed, lust, and wrath have no hold on me. But them other two rock.

Give me that whole bear routine. The idea is to eat as much as one possibly can and then sleep it off for months. Oh, this checks all the boxes. I would give it a shot, even though I know I’d run the risk of spending four months looking for the classroom I never attended in order to take the final exam, or racing through the airport to make my flight, or not being able to find a clean private toilet to poop in.

What I wasn’t aware of was that ladybugs hibernate also. Many of them gorge themselves as fall approaches, which I find disturbing, because they do not have the benefit of stretch pants. Nevertheless they apparently start packing on the micrograms and then get together in a big heap with thousands of their little friends, like a pile of puppies, to sleep it off and sit out the winter. I’m not sure what the angle is. As far as I’m aware, ladybugs do not generate heat metabolically. So the bottom ladybug in a pile of cold ladybugs is still cold. Perhaps they just like company.

Ladybugs are also called Lady Beetles but not by anyone I know. Probably only entomologists. Because entomologists know ladybugs aren’t bugs, they’re beetles. Hell, everyone knows that, but we’re still going to call them ladybugs. Entomologists should let a loop out every now and then. Knowledge can be a curse. It’s like how I keep trying to tell everyone that “iris” is not the plural of “iris” but I never get anywhere, and I’m the only one unhappy. Nobody cares and I shouldn’t either. 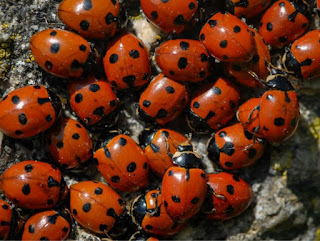 What’s more interesting is why the beetles are “lady” anything. Evidently in the Middle Ages–so goes the tale–crops were failing right and left and the people prayed to the Virgin Mary for help, and she sprinkled ladybugs over the good Catholic farms. The insects scarfed down the aphids and all was saved. That’s just the kind of thing God and his staff will do for the properly reverent. And the people called their saviors the Beetles Of Our Lady. And larded the original story up with supporting religious hoo-ha, to wit: the red beetle represents the cloak of the Virgin and the black spots are her joys and sorrows. That’s a lot of significance to heap on a small insect, but in case they get too full of themselves they can fly to Poland, where they’re known as “God’s little cows.”

Some time before the slumber party the female ladybugs lay eggs near a big food source such as my broccoli crop, which went gray with aphids this year. The stated reason is to give their larvae a better chance to find food. More likely, they’re completely stuffed full of aphids themselves and they can barely get off the sofa to fly. Although it all works out the same.

What ladybugs do in a heap over winter is not actually called hibernation, but “diapause,” which any entomologist would not be able to prevent himself from telling you. Basically they just push the pause button. (You get a ladybug in peridiapause, she’ll be cranky for years.)

Ladybugs have made a nuisance of themselves in the course of their overwintering by congregating on the siding of light-colored houses and finding their way inside, where they warm up, wake up, and spew stinky yellow goo out of their knee-balls over anyone with a disciplinary broom or vacuum. In the course of reading about this I learned that they “are of special consternation to those who are entomophobic,” meaning they really creep out people who are afraid of bugs. Who writes this shit? Entomologists? Anyway there are some ways of preventing an infestation. Simply seal all cracks, crevices, and openings in your entire house that are larger than a tiny beetle. And repaint your house. Done! 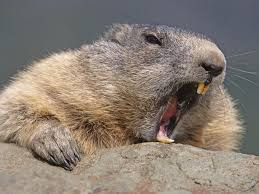 Well, none of this is as appealing as being a fat marmot snoozing away in a burrow in one of the prettiest places on earth, but it’s a living. And there’s a lot to recommend it. Fact is, the world would be a better place if we all left it alone for a few months every year.