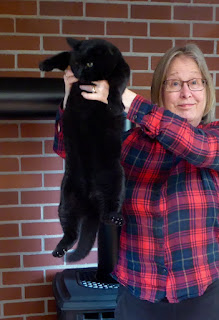 The thing about cats and the swingy thing on their bellies is that they are not embarrassed by it at all, no matter how much we think they should be. They consider it, and all the rest of themselves, to be part of the essential cat kit. Cats are not vulnerable to human ridicule, although if they personally get themselves into a predicament they weren’t anticipating, such as falling off a counter or toppling a Christmas tree, they will commence the “I meant to do that” paw-licking ritual.

The swingy thing has a name: primordial pouch. It belongs on the cat. It’s hard to understand what is primordial about it. It’s not as if In The Beginning God created the cat-flap as a placeholder until he could whomp up the cat. Maybe it was named by someone who got tired of people calling his cat Flabbity McFattycakes. He might say, heatedly, “That swingy thing has been there since the beginning of time,” even though the actual cat is only three. Or, maybe it’s just a random adjective employed to deflect criticism, such as if I started calling my neck a “gelatinous chin-rest” or a “gibbous head-peg.” It confers legitimacy on an otherwise graceless accoutrement. 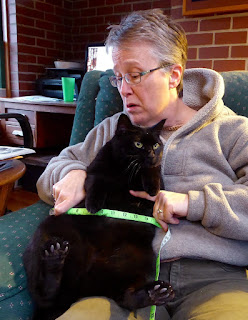 So the primordial pouch is plenty legitimate, and not a sign of the cat letting itself go. Cats don’t let themselves go until they get to be about eighteen, and then, as I’ve observed, they quit grooming and get spiky and corduroyed and squinty about the eyes, but can still land a claw in a dog’s snoot without even moving their butts.

The primordial pouch has purpose. Evolution favored the cat with wiggle room built in. A cat’s pajamas are designed to contain the operating system without being too snug about it. A good cat should be able to turn around completely inside his pudding-bag, in case he finds himself in an unexpected position requiring extrication. A bonus, in an animal likely to pick a fight, is to have major portions of himself not attached to anything vital. If another cat decides to do some disemboweling with his nasty hind feet, he might discover he’s scratched up the fabric pretty well but the guts are still in fine shape and ready to roll out cat turds as though nothing had happened. It’s like a matador’s cape. 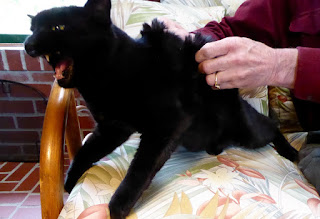 Another reason to develop an extraneous fur flap is to allow for necessary elasticity. You might think you can eyeball the dimensions of a cat, but if you hold it up by the armpits, it elongates quite readily, like a plumb-bob on a rubber band or a worm looking at a fishhook. Stretchiness is a virtue in an animal bent on jumping on your kitchen counter for the butter, and the primordial flap allows it to do so without ripping.

If I had a primordial pouch, it would be made of friendships and perspective and a gift for forgiveness, and it would keep me from getting hurt when I play on the internet. There’s some fierce claws out there.