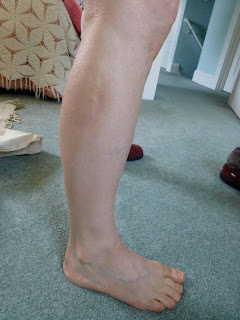 I am exquisitely sensitive to medically significant changes in my body. In fact, there is hardly an aberration that I can’t link directly to my own death in some way, and that is why I recently decided I should quit crossing my legs. I have a permanent dark spot on my right leg caused by the pressure from my left knee, and it looks plenty fatal to me. Now every time my legs are crossed, I am visualizing the compressed area as a sort of embolism factory. Some day I’ll stand up and the little bugger will shoot straight to my brain and take me out.

Problem is, I can’t seem to control my legs. They cross themselves. I have no idea when they’re doing it, but I’ll look down and there they are, crossed. It’s as mysterious as the appearance of a lap cat. You look down, and there you are hosting a cat, and you have no idea when it showed up. Obviously I know better than to believe my legs are crossing themselves. That would be ridiculous. So I assume that they are under control of the auxiliary brain in my butt, a legacy of my stegosaurian forebears.

The famous second brain of the stegosaurus was postulated soon after the discovery of the first fossil skeleton. Scientists examining the skeleton noted that the animal was the size of a bus and yet had a 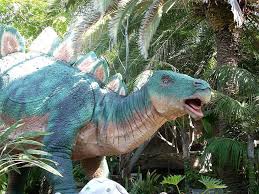 brain case no bigger than a dog’s. (And not necessarily a border collie’s, either. The Afghan Hound has a brain the size of a pistachio, just big enough to operate its shiny coat.) It seemed way too small to run the controls of a big dinosaur. But there, in its proto-tushie, was a canal twenty times larger than the brain case. Clearly, the butt was carrying the load of operating the animal, in the same manner as fire engines are steered from the back as well as the front. If you’re a hungry stegosaurus on the hunt for a quick cycad, you don’t want the rear end swinging out too far. 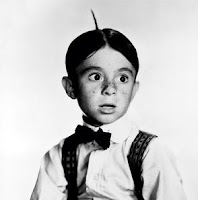 The original paleo-posterior postulator did draw some conclusions that have since been discarded. The famous plates running along the animal’s back were originally thought to lay flat along the top (stegosaurus means “roof lizard”). And we now recognize that that was not the default arrangement, except on Sundays, when the plates were slicked down with a center part and a cowlick at the back, like Alfalfa. Gradually the notion of the butt brain was relinquished as well. Modern paleontologists believe that the stegosaurus was able to run his entire self with his tiny little head, albeit not well enough to make it all the way through the Cretaceous.

But that doesn’t mean I don’t have one. Anyone would assume I wouldn’t need an auxiliary brain to run things south of my equator, because nothing on me is all that far from my head. But my head, like the roof lizard’s, is very tiny–children’s hats fit me–and busy with stuff like wondering if chickadees can tell each other apart. Which might be why I fall down so often. A secondary intellect in the fanny would be well placed to take care of things like leg crossing and creative flatulence, and if mine isn’t doing such a good job keeping me upright, well, who’s to say my cerebum isn’t just trying to be witty? What else do you expect from a smartass?