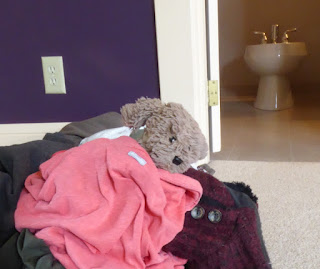 I mentioned earlier that the business of being a bright yellow spring goldfinch is not a matter of popping into the goldfinch closet and pulling out a fresh outfit. It doesn’t happen all at once. It’s more dithery than that.

And I don’t even know where I come up with such a metaphor. What would I know about going into a closet and finding an outfit? I don’t hit the closet that often. I’m more likely to haul something out of my Closet Annex. That’s on the floor somewhere between the bed and the bathroom. I won’t have my glasses on, and my selection for the day will be determined by the forces of gravity and friction. Whatever is on the top of the heap is a winner.

I’m not sure what it’s all about. A grownup person should be able to take ten seconds to hang or fold up her clothes at the end of the day or send them to the laundry. Mine go to sartorial limbo.

The thing is, I don’t like to run the dishwasher until it’s jammed full and I don’t like to wash my clothes unless they’re truly crapped out. And given my low standards, “crapped out” might have to involve actual crap. If I were going to refresh when my shirts were just getting pitty, I’d have to change every three hours starting at 10am.

None of this applies to Dave, who has no body odor. He’s as fragrant as a ghost. Sometimes when I’m in a contemplative mood and the air smells like nothing at all, I think “Ahh, Dave.” This is spite of the fact that he’s walking fifteen miles a day out there. I think he’s sensitive about my accusations. Sometimes he swears he has developed a manly musk and demands that I smell his armpits to affirm–it’s easy, they’re right there at my face level–but there’s never anything detectable. He could wear the same shirt for months on end and still be in good shape if the Queen stops by. 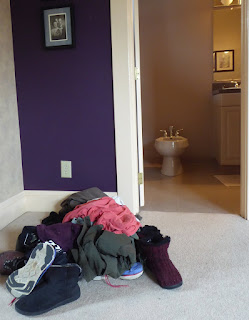 After I’ve raided my Closet Annex for a week or two, I move stuff into the laundry pile. Anyone curious exactly how long I can wear the same shirt can avail herself of standard geological methodology. Start chipping away at the oatmeal nurdles and run some carbon-dating. I can’t seem to get all my oatmeal into my face, but the stray nurdles never get far. That’s what the bra is for at this point. To protect my pants.

I can flick at it for a few days but there is a certain level of oatmeal accretion that even I find unacceptable, and then it’s off to the washing machine. From which it eventually makes it back to the proper closet, for a while. [We will take a brief break with our hands over our hearts whilst remembering the immortal words of my friend K.C., who once barked at her husband when he reached into the closet for a shirt: “Don’t wear that! I just ironed it!”]

What does it say about an adult woman that her clothes are in a heap on the floor? It says her mom is no longer with  us; it says her clothing choice is a decision made before coffee.