The Damaged Children In Charge 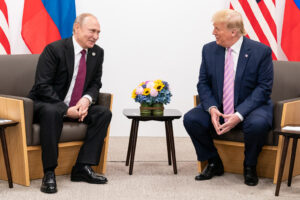 So there I was minding my own business, a lot of which is conducted from a comfy chair using a brain with a lot of holes punched in it for ventilation, and a thought occurred to me. That happens. Thoughts occur and then fly away and that’s what makes it so drafty up there. The noteworthy thing about this thought was that, beyond all reason, it cheered me up.

My thought was “Huh. Maybe Putin will start a nuclear war, and that will finally lead to that nuclear winter we used to be all worried about, and that will have a prolonged cooling effect on the climate, which we need since we’re unwilling to quit making things worse in case it means we’ll have to start using our muscles and sticking around home, and as a bonus it might take a very large portion of us out altogether, resulting in less consumption, and the survivors will scrabble around in the dirt looking for grubs to fry up, and maybe learn how to share, and gain a proper perspective about what is and isn’t important in life. And the rest of the biosphere, after suffering a jolt and a dip, will be fruitful and multiply.”

So you can see why this made me so happy.

It is a thing of wonder to me how much sheer crap is visited upon the world by men who apparently didn’t get what they needed in childhood. It’s quite the payback. Say you were the laughingstock of the Pee-Wee Hockey League because of your undescended testicles. Say you fell in with a bad crowd— the KGB, for instance. Where one day you learned that “putting the screws to someone” was not always metaphorical: and just like that, your whole life opened right up.

Still, you could just settle for posing on top of a large horse with your nipples out. Starting World War III seems so extreme.

It’s remarkable. The course of almost everything consequential in the world is determined by its most deeply insecure inhabitants. Racism, exploitation, and conquest are not the habits of people who are comfortable with themselves. And yet here we are, a bazillion chicks jammed into a tiny cage, working out the pecking order, and some of us won’t be happy until we’re standing with our little chicken feet on someone else’s head. Insecurity: how else to explain the fact that some people have billions of dollars and it’s never quite enough?

Got to give that murderer in Moscow credit for a long view, though. I would never have believed he could actually tear another country apart from a distance merely by separating its citizens along perforation lines he provided. Who would have ever thought that he could persuade so many people that the opposite of Freedom is common sense, scientific knowledge, and the very democratic institutions that used to be considered the protectors of liberty? Throw in a set of cartoon enemies (bathroom lurkers, Mexican rapists, history teachers) and mock the norms of civil discourse, and you’ve softened up your target nicely.

All of this went according to the murderer’s plan; and then, of course, he got a little lucky, drawing an ace of a stooge in Trump. That one was well on the way to handing him the keys to Europe on a golden toilet seat. And he didn’t even have to have kompromat on a man that insecure, although no doubt he does. Putin is already everything Trump admires most. He has no constraints and no morals and no regard for anyone but himself, and he can murder his rivals at will. He can even wage himself a vanity war.

Donald J. Trump couldn’t quite pull that off. But he’ll be okay. In the deepening dusk of his dotage, as he continues to invent his own wealth, and the pills quit working and his fluffers call in sick with COVID, he can always lie back and dream of Putin.