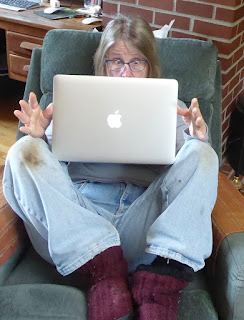 There are things you just don’t want to hear if you’re a writer. No, not “While I’m not the right agent for this project, I’m grateful you sent it my way, and I’m wishing you the best of luck.” Not that. We’re used to that. That is, at least, a response.

No, what you really don’t want to hear is the guy at the Apple Store, where your laptop has been quarantined for five days, ask “How important is your data to you?”


How important? You mean, everything I ever wrote? Those data? I would really like to keep those data. Thank you so much.

And in the future, if there is some possibility that everything I ever wrote is no longer among the living, you really need to work on your communication skills. Work up to it. Don’t say my data is dead. Say it’s up on the roof, and you’re getting a ladder, and you’re sure everything will be just fine. Tomorrow, say it looks like my data is trying to jump off, but you’re pretty sure you can bring it around with a can of tuna.

As it happens, I have all my data on a little external hard drive the size of a deck of cards. It’s embarrassing, but probably everything I ever wrote and ever will write will fit in that thing. The Library of Congress will fit in that thing. I bring my deck of cards to the Apple Store and hand it over, and the boy behind the counter, who talks very fast and doesn’t know how to speak in Elderly, whisks it away behind a curtain. He plans to empty out my entire laptop and shove a new system in it. “It’s really something,” he explains. “I no sooner get rid of all your infections than they just keep pouring in.” It was fine until about three weeks ago, but apparently it’s the worst case he’s ever seen in all his, what, twelve years of life. They’re setting up a ventilator.

The next day I pick it up. He says everything is fine. My data are back relaxing in the living room, and all my passwords have vaporized, but everything should run real smooth.

Well. Except I can’t get any mail. Last mail was five days ago. Can’t send mail. Can’t find out who rejected my query letters. I was poking at everything and suddenly an Apple Support page popped up with a chat robot that actually put me online with a human within a minute. He was wonderful. Got my browser working, checked things out, but couldn’t get me my mail without my email password. What is it? he asked.

I don’t know. I don’t even know whether to call the outfit whose domain I’m using, or my internet provider. They’re not the same people. I decide for the time being to go to my 11-year-old desktop that’s been sludged up for a year and see can I find any mail. It wakes up like a drunk. Press any kind of button on it and you can hear it whirring around like one of those lottery tumblers being cranked. You can hear all the little zeroes and ones banging around in there for minutes before it poots out a possibility, and you have to check it against your stack of tickets to see if there’s a match. Wal, shit, it drawls. Ah dunno.


It’s now too late to call the domain people, and the internet people aren’t people. They’re chat robots, and when I type in my email address, they claim they’ve never heard of me. And I pay them way too much for that.

The next day I call the domain people, who are real people and who answer the phone in two ringy dingies, and I will be DAMNED if they don’t turn out to be the people in custody of my passwords! They update them and I write them down and I type them into a box on my laptop and my mail comes whooshing through! For one of my accounts. Not the writing account. Same procedure doesn’t work at all for that one. 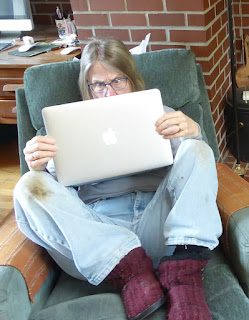 And all morning my mail in the one account works, except when it doesn’t, and my cursor disappears and then shows up again later, and I can’t comment on my own blog, and I’m afraid to go into that whole thing in case the entire Blogger site slams a door in my face and I can’t post a new piece for the first time since 2008.

“How’s it going?” Dave asks, keeping enough distance that I”d have to use a gun to kill him, which  he knows I don’t own.

I don’t answer. He reads my face and springs into action. Brings beer. Hides the razor blades.