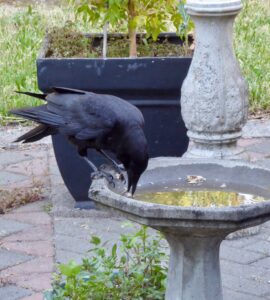 Yesterday when our personal crows (Dickens, DooDah, Auxiliary Dickens, and Ancillary DooDah) came by for their daily peanuts, which we are insisting they ask for in some manner, because we’re self-centered attention junkies, Dave had himself a notion. It was much like the notion of feeding vegetables to your dog under the table. He had a stale quarter of a sandwich left that he didn’t want, and he thought maybe DooDah would.

DooDah did. DooDah scooped up the entire sandwich, about the size of drink coaster, and flew off with it. It isn’t a great idea. Bread mustard salami cheese peperoncinis mayonnaise. Nothing in that sandwich is good for birds, but it isn’t all that good for humans either, and in any case we don’t make a habit of it.

I watched her set the sandwich down and poke at it and maybe retrieve some particular element and then she picked it up and stuffed it into the soft soil near a patch of arugula. Then she found some dead leaves and carefully placed them on top. Well! Corvids cache nuts, seeds, and salami sandwiches! Awesome.

Today I looked up in time to see DooDah flying in with a familiar-looking sandwich about the size of a drink coaster in her beak. She went straight to the bird bath and put it in. Then she carefully peeled apart the layers and set them side by side to soak. All righty then. Softening it up.

And then—then—she put it back together in the original order, with all the corners lined up. The cheese was missing. I think she’d pulled that out first thing. She picked up the perfectly recombobulated sandwich and took it over to the soft soil and poked it in. Put a few leaves on top.

DooDah shook herself and straightened a belly feather. “Did you check the pantry?”

“There’s nothing in there.”

“There’s no cheese,” he said. Kicking.

“For heaven’s sake. There are rooks in the United Kingdom that would be thrilled to have the stuff you turn your rictal bristles up at. I don’t know why I even bother.”

“Maybe you should go live in Chuckie’s mom’s tree. There’s Mexican a half block away. You could get up off your dead cloaca and hit the dumpster if you don’t like what we have.”

He kicked at some more leaves. “I’m not all that hungry.”

DooDah walked over and poked him hard in the head, just for drill. “Did you poop today?”

“Well go poop again. We’re not having anyone backed up just before nesting season.”

“There’s nothing to do.” 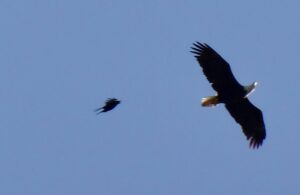 “Excellent. Because the hawk-harassment posse is looking for recruits. Plus I could use some help gathering twigs for the new nest.”

“The new nest? That’s not for another month.”

“And we need someone on peanut dispenser surveillance. That back door over there. When it opens, peanuts come out. I can’t be on it all the time, because unlike some people, I have things to do.”

“I’ve got things! The guys and I are thinking of going downtown to roost early.”

Kick. Kick. “Is there any more salami?”