There was a dot on my wall the other day. Looked a lot like a house fly doot, except it was moving. Ambulatory poop always merits close inspection.

Tiny little sucker though. I couldn’t even focus on it so I took a picture and blew it up. Sure enough it was a working beetle of some kind–possibly a pet for a ladybug. A few days later I saw another one. Then a dead one. Then a couple more live ones. The Doot Dots were trending.

So I looked them up on the internet, which has everything. And the very first photo that came up was my guy. He’s a Carpet Beetle. He just mates and dies, but his babies eat carpets.

It’s always a bad sign when the first ten pages of Google hits on a subject are from pest control outfits. And how could there have been carpet beetles all this time and I’ve never heard of them until now? 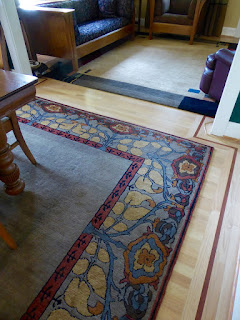 What else is out there that I don’t know about? Linoleum flies? Chintz bugs? Wallboard weevils? I was a bit concerned because we have invested in good wool rugs. I finally found an article not written by an exterminator and discovered the following: carpet beetle larvae feed on animal-based items such as feathers, silk, wool, and fur. The adults like to mate near a light source, so I assume they do not engage in body-shaming, even though, like most beetles, they’re awfully round. My beetles are true to form. They’re mostly on a guest bed that Tater cat prefers. The pillow is a feather pillow and the pillowcase is felted in cat fuzz. Plenty to graze on. And there’s a window right above it. Bada-beetle-boom.

Really, despite the exterminators’ best efforts, it was hard to work up a good lather about the carpet beetles. They aren’t really big enough to do a ton of damage in a hurry. And they prefer to dine undisturbed, so even going around scaring your linens once in a while might be sufficient to deter them.

Where they are really of concern is in museums and taxidermy shops. They like to eat dead insects and if you happen to have a valuable dead insect collection you’re definitely going to want to monitor for the beetles. My own dead insect collection, which I store mainly in cold-air vents and light fixtures, is still purely at the hobby level.

And I had only the one plan for taxidermy. I was going to be stuffed upon my demise and mounted in a zombie pose inside a sheetrock partition somewhere so I can make a final impression on whoever eventually does the demolition. Now I have to worry that my victim will be only momentarily startled and then go “Oh, look, carpet beetle damage. That’s not alive.”

Anyway I’m not planning to do much about them at this point. It says here they’re drawn to “stored or rarely used items such as pet dander,” which is a concern. It’s so hard to throw away your pet dander because you know just as soon as you do, you’re going to need it.

The adults do fly and that’s considered a nuisance by some, but I’m not sure I’ll be able to distinguish them from my eyeball floaters. They’re preyed upon by ants but I’m not about to introduce an ant population to clean up my carpet beetles. I know that song. Eventually somebody swallows a horse, and they die, of course.

Really, all they say to do is vacuum regularly and move your stuff around. Essentially, the beetles succumb to normal household hygiene. So it looks like ours will be around for a while.

They’ll chew away at the fabric of our lives under cover of darkness and we won’t even know the extent of the damage until it’s too late. Nothing to do but vote the little suckers out.