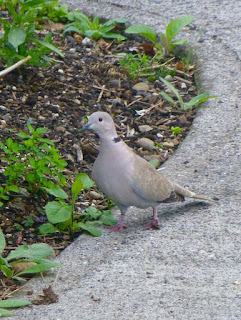 We’re not either of us real good birders, but we do pay attention, and that’s the first three steps in the birding manual. So we stopped dead in our alley the afternoon we heard a new voice. Who. Who-whoo. Who.


“Is that an owl?” Dave was incredulous. It wasn’t out of the question. We’d seen a barred owl slumming right here in the city that summer.

“What kind of owl hoots in the middle of the day?”

Well, I’m not sure, but maybe a dumb one. And owls in general aren’t known for their intellect, no matter what you’ve heard. They’ve got the big fancy eyes and a real tiny head, and something had to give, evolutionarily. And that was the brain. It’s probably the size of a pistachio. Still, they’re smart at being owls. So they really should be snoozing in the afternoon, to gear up for a nice midnight rodentfest.

We stared into the likely owl crannies of our tall trees and came up short, even Dave.

“Sounds kind of like a dove, actually,” he said. It did. Not a very interesting dove, either. Who. Who-whoo. Who. Over and over. For the rest of the day. It was starting to get annoying. It was as if the local nuisance dog had had the bark spanked out of him and substituted a nose whistle.

And that is how we were able to pinpoint the actual day the Eurasian Collared Doves moved into our yard. I’d heard of them. And what I’d heard is they’re taking over.  They’d gotten a purchase in the Southeast and fanned out from there. They breed all year long. They’re Catholic; that’s why the pope dropped some on Vatican Square, where they instantly got snapped up by a heathen hawk.

I’m not really a dove fan. They’re just pigeons in a different suit, and I’m not a pigeon fan. We’re talking about a bird so dim its head has to keep catching up with its own feet when it walks.  Maybe it started when I was a kid. I knew the song about the two turtledoves, which, in my imagination, came complete with carapaces and plastrons and balanced delicately in the branches. So to find out they were more dove than turtle was a disappointment.

“Dove”comes from the middle-English “dufa,” from whence we also got “dufus.” And the Eurasian collared dove in particular comes from the old world, via the Bahamas. A bunch of them got released during a pet shop burglary, probably engineered by the doves themselves in a rare spasm of ingenuity. From that point they hied straight to Florida and began dropping anchor eggs all over the continent. 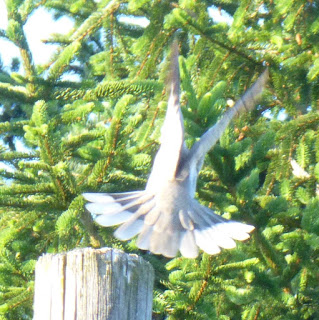 It’s bad, people. It’s all well and good to feel sorry for a few birds fleeing harsh conditions and incarceration in the Bahamas, but there’s no reason to stick out the welcome mat for the whole damn species. Even if only a minority of them is clever enough to have a criminal bent, they’re going to drive down wages for resident mourning doves. Nothing good can come of this. We’ve seen it right here: July 22nd, 2015, we saw our first Eurasian collared dove in the yard, or rather two, because they always have an accomplice. And then, by December, we had a whole cell of them, flappiting around the yard and whooing incessantly.

They’ve got nothing to say that didn’t get said in the first five seconds. And their main food is grain. We need to register them in a database to track them before it’s too late. They’re a direct threat to the beer industry.