The Edge Of Flight: Part 2 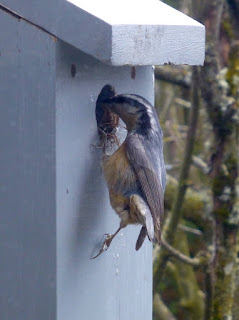 When we last left the Nuthatch Family, a scrub jay has flown off to a tree, possibly with a nuthatchlet. I can’t quite tell if the jay had anything–it was all too quick–but it does Not Look Good. I’m utterly bereft. I want to call the authorities. I want to call the President. It had taken a whole month to make this little dude, and also I’d just videoed him, up close and personal. I was invested. After a while Dave (the nuthatch) is back in the tree again. I wonder if there are any more babies in the nest. Then he goes into the box empty-beaked and comes out with stuff. And again. And again. It’s like he’s tidying up after a party, picking up the Solo cups and paper plates. There are clearly no more babies. I don’t know how many there were; I don’t know if I missed any earlier ones. Within an hour Dave is continuing to clean up and sitting on branches acting fluffy and flappy and flirtatious. Was he planning a new brood?

During commercial break I looked it up and it seems it’s unlikely. Usually they have just the one nestful. I guess he’s just a neatnik. I do see another nuthatch fly straight through the tree and away, and I don’t get a good enough look to be sure, but it was slow, more prop plane than jet, so I think it’s the first baby I saw. Good.

Then the Missus comes back. She flies into the nest box with Dave (the nuthatch) already in there, and then she turns around to fly out. But she’s stuck. She’s STUCK! HOLY FUCK! Her foot is all tangled in some nesting material/pine-resin glop and she’s flapping like mad, but she can’t go anywhere. Dave looks out and now they’re snapping at each other, like he wants to get out but she won’t let him, and she’s snapping back I’m fucking stuck you idiot, take this shit off my foot, but he doesn’t get it, and then he flies out anyway when she ducks.

She’s picking at the stuff her foot is stuck to, but getting nowhere. I’m growing desperately upset. I don’t want to freak her out by opening the window and working on her foot, and I don’t know how I’d go about it, anyway. Dave (the man I married) looks out the window and says “Uh-oh.”

“Scrub jay on the fence. He’s hopping closer. He’s looking up. He sees her!”

Amazing how fast I can lose that hesitation. I fling open the window, put my hand out to cup her back and wings with one hand and free her foot with the other, and she takes one look at me and blasts out of there. She lands in the tree. Dave (the man) and I stare. Yes, she still has a foot attached. Yes, it’s still working. She flies away.

And for the rest of the day, for hours, for hours, Dave (the nuthatch) sits on a twig and beeps. He beeps loud, he beeps long, he beeps fast and he beeps slow. He goes to the nest box to look in. He comes back out and beeps. The next day he’s still at it. And the next. Beeping and beeping. Checking and checking. He’s beeping himself hoarse. He keeps going in and out of the nest box to make sure. We don’t see any babies. We don’t see the Missus. They’re all gone.

But I can’t. This time I have my own perspective. And it’s a lot like Dave’s (the nuthatch’s). And on this, the fourth day since his entire family went away, he’s breaking my beepin’ heart.