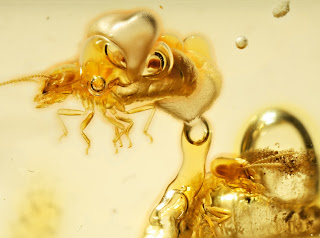 If you really want to get on my good side, you’ll find me a fossilized termite fart. Nothing would please me more. I wasn’t even aware that such a thing existed until I perused a National Geographic magazine and there it was: a blob of amber, or fossilized tree sap, containing a termite in flagrante pootus. What a find! I thought. What are the odds that a booger of tree sap would not only trap a termite but preserve his gaseous eruptions for eternity? I was reminded of the photograph of the grizzly bear standing in the stream, his toothy jaws perfectly framing a doomed, leaping salmon. One-in-a-billion shot, I thought. Then I saw more and more of them. Apparently, one needed only to come to the right spot and set up a tripod. A significant portion of the salmon population travels to the ocean to gain weight for three or four years and then finds its way back to the waters of its birth following a primeval instinct to become bear poop. 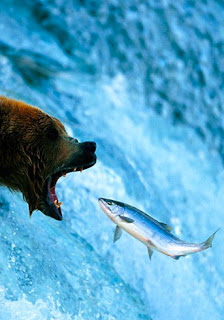 Turns out the fossil termite farts are the same kind of deal. Tree sap has buried plenty of termites over the years, inasmuch as they are in the wood-chomping business, and trees tend to be mainly wood. And it further turns out that termites do only two things: they chomp wood, and they fart. It’s not easy to metabolize wood: it takes a village of bacteria to do it. The bacteria are working in permanent overtime status, and as a result, termites are a regular methane machine.

Literally: 1/4 of the methane production of the world can be traced to termites. It’s a problem, because methane is a major greenhouse gas, more potent in disrupting the climate than even carbon dioxide. Fans of fossil fuel consumption like to hold up the lowly termite as the villain in this piece, but it should be noted that the termite population has not changed much over the millennia, so their contribution to the atmosphere in the form of farts is probably static and they are not to be blamed for the current spike in greenhouse gases. “But if we could get rid of all the termites,” they say, “couldn’t we keep pumping all that fossil fuel into the atmosphere for another hundred years?”

As if. Tom Delay was in the pest-control business and even he couldn’t get rid of all the termites in the world. This stuff is hard. We can’t even bring down the numbers of Republicans infesting the House of Representatives with The Vote and access to factual information.

Termites are not the only source of methane, however, as I am in a particularly good position to know. But even outside our house, there are animals producing more than their allotment of methane. Herbivores, mostly. Cows and other vegetarians are famous for it. It isn’t easy to digest plant material. Cows can’t even do it without throwing up a little in their mouths. And since we have artificially augmented the planetary number of tasty cows, there has been an uptick in flatulence traced to bovines. It’s a problem. New Zealand was the first country to try to do something about it. Not cork the cows; but try to mitigate damages to the atmosphere in a responsible way, by assessing a tax on the owners of cattle and sheep, of which they have a great many. 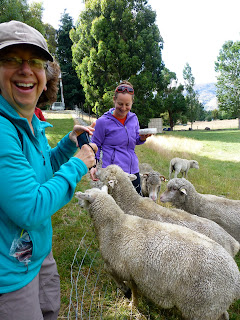 This is a sensible approach. One of the reasons greenhouse gases have gotten to be such a terrible problem is that the things that produce them are artificially cheap, because no one is being asked to pay for cleaning up after them. Those who whine about the free market and how vital it is are sitting on top of a stacked deck. If the consumers of fossil fuels, and hamburger, were required to pay the full cost of their use, the free market would reflect some way different choices. “I guess I could take the train and eat fewer bananas,” we’d say.

It’s a simple concept. If I poop in your well, I owe you. For some reason, though, we give people a pass, if they have really massive amounts of poop, and the well is only the atmosphere that has sustained us. An atmosphere that, true, has had different compositions in different eras, producing climates that have varied over time; but if we had our druthers, and a clear choice, we’d probably opt for the climate that allowed us to flourish, and not the one that only sustains termites.

So yes. New Zealand attempted to tax the purveyors of livestock to counter their emissions. And the idea was batted down rather handily, once opponents began calling it a “flatulence tax.” Hell, people get traction here talking about Death Taxes, even though no one has ever been taxed for dying, or Job-Killing Taxes, whatever that means. This, on the other hand, really was a flatulence tax. That doesn’t mean it wasn’t a good idea.