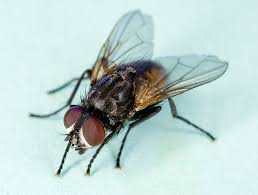 Well, they all showed up on the same day. April 8. What a bunch of goofs.

April 8: Housefly Day. Not a ton of flies. Well, possibly a ton, but not a large number. These are the biggest, slowest, logiest bunch of fattycakes I’ve ever seen. They don’t even fly so much as they lumber. They remind me of the big-bellied prop planes that used to trudge across the sky over our house when I was little. You saw them coming and you had time to go inside for a popsicle before they were all the way done with going over your house. They came from National Airport, which was relatively close by. That’s the one that got renamed the Ronald Reagan Union-Busting Libertarian Assholes Airport, but by that time, the planes had a little more pep and we had a lot more confidence they weren’t going to plop into the back yard.

I have no idea what was keeping them in the air. The houseflies either. In fact I’ve been watching them, and they don’t all stay in the air. Some of them end up on the floor from sheer excess of avoirdupois. I coaxed three of them out the window already. You know how you open the window for a fly but it always goes buzzing off in the wrong direction? These guys just lifted off from the windowsill, I went to get a popsicle, and then I popped them on their fannies in mid-air and they bumbled their way out.

The larger house spiders are watching the flies warily and wondering if they’re well-marbled. Spiders are not known for hunting cooperatively but it wouldn’t be the worst idea in this case. Early humans could live off squirrels but if they banded together and took down a mastodon they were set for the winter. The smaller house spiders, meanwhile, are boarding up and latching the shutters. They assume mastodons are mostly aspirational anyway. You don’t want one falling on your house.

I figure this was a single hatch, since they showed up all at once. The maggots had to be the size of pinto beans. I don’t know how they got in. This is why people used to think flies were spontaneously generated from meat. You’d have a lovely piece of meat and then out of nowhere it flang out maggots. It took people a remarkably long time to recognize that the maggots came from fly eggs, even though the experiments involved were simple. (Cover the meat.) It was just easier for them to imagine flies came out of nowhere. Isn’t that silly? 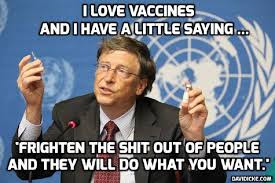 But we’re way smarter these days. I’ve been researching a lot of typing on the internet, and it’s perfectly obvious that my flies came from Bill Gates. Bill Gates is a multi-billionaire who keeps trying to do good works with some of his money, which most of us agree is highly suspicious. He has already been caught trying to depopulate the world using his dastardly vaccines, and now, with the coronavirus, the word on the street is he’s working on a vaccine that essentially implants a microchip in the unfortunate recipients so that he can control everyone. You can see the potential for big mischief here, if you’re paying attention at all. The odder the conspiracy theory, after all, the more likely it is to be true, because the best conspirators are known to be very sneaky by nature. As lots of typists on the internet are saying, Wake up.


So I’m sure that’s what the deal is with my flies. Bill Gates developed them. Clearly, they’re drones. They’re spying on us every minute. Somewhere Bill is sitting in a lavish bunker watching video footage from my flies and I have half a mind (this helps) to show him my big white fanny. But I won’t. He’s just wily enough to have snuck in a real decoy fly, and I don’t want to get into a personal maggot situation.