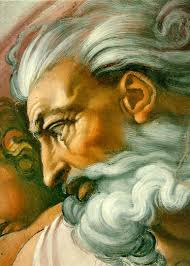 I took a little stroll through the Bible the other day. I was familiar with it as a child but you never know if your literary tastes hold up into adulthood. I thought I’d just flip through but instead I got completely caught up in the first book. Talk about your pacing!

Right off the bat, humans started screwing up, starting with disobeying an admittedly arbitrary rule and then plunging right into murder. Some of the action is off-screen: for instance, you’ve got your two humans who are supposed to get the population ball rolling, which means their kids are going to have to get fruitful either with each other or their mom, but we soon learn this kind of thing is totally normal in Genesis. Anyway God looked at the whole mess and called for a do-over, with good reason, and sent down ark instructions and invented the rainbow. (Noah, the one God had taken a liking to, had three sons and a vineyard, and one day he got drunk and blacked out in his tent naked, and his sons carefully covered him up without peeking at him, and for some reason this really ticked him off. Whatever.) The three sons ended up populating the whole world.

Which brings us eventually to Abraham. He and the Lord conversed, leaving Abraham in fine shape. He traveled to Egypt with his wife Sarah but worried that the Egyptians were going to want to have their way with her because she was so beautiful, even though she was at least 65 at that point–people didn’t let themselves go so much back then–and he told her to tell everyone she was his sister, so they wouldn’t kill him. (It’s bad to steal another man’s wife, but murdering him is okay.) And sure enough he palms her off on the Pharaoh, but it falls apart eventually when the Lord sent plagues to punish the Egyptians for all this; but Abraham is in no trouble at all with the Lord, and they leave and get rich again. They pull the exact same sister gambit later on with the king of Gerar. And not only that, but when Sarah, who really was his half-sister but who’s counting, fails to have children, she suggests he help himself to her pretty Egyptian maid, and soon enough Abraham is a first-time dad at 86. 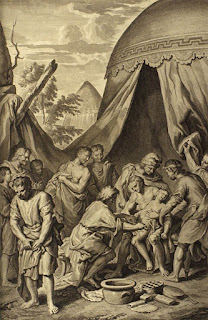 God was cool with all this and looked favorably upon Abraham and told him he was going to be the father of kings and nations, and all he had to do was snip off a bit of skin around his then-99-year-old penis and do the same to his son and his slaves and any other males in the vicinity. That had to have gone over well. And not only that, but it was going to be Sarah having the anchor baby for the nation-building. Sarah overheard this and chuckled at the Lord, which you should not do. “Is any thing too hard for the Lord?” the Lord demanded, rhetorically, and maybe no thing is, but he made Sarah bear a child at age ninety, and that can’t have been easy.

Meanwhile, their nephew Lot had decided to move to the greater Sodom area, which was a bad move. Abraham found out Sodom was doomed and asked God if he’d really smite Sodom if there were fifty good men there, and God said he wouldn’t, and then Abraham, who thought he had a good rapport, bargained him down to ten good men, and probably thought he’d done well, but God didn’t look too hard and stuck with his plan to take Sodom out with fire and brimstone anyway.

God decided Lot was okay and encouraged him to leave Sodom but he didn’t, so he sent some angels that looked like men after him to close the deal. The wicked men of the city wanted to meet the new “men” but Lot, being a good guy, refused to make the introduction, instead generously offering to send out his two virgin daughters for them to do with as they wished.

Then the angels dragged him and his wife and daughters out and told them not to look back while God smote the city, but Lot’s wife did, probably because her other kids were still back there, for Pete’s sake, and she was promptly mineralized for her maternal instinct. Lot and his daughters scampered off to a cave and his daughters drugged him with wine and got themselves knocked up by him–their own dad–without (wink, wink) even waking him up. All that was fine and dandy. 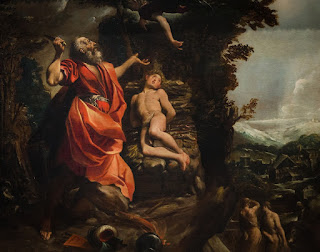 Then, the Lord popped back to Abraham and suggested he murder his own son Isaac to prove his devotion, and poor Abe got all the way to the point he had his kid trussed up and on kindling and a knife at his throat before the Lord went all, ha ha, just kidding, take this here sheep instead. Isaac in turn grew up and went to a new town, where he started telling people his beautiful wife Rebekah was his sister, just in case the men in town would be inclined to kill him in order to ravish his wife. Stop me if any of this sounds familiar. But the jig was up when he was caught sporting with her, and the town king said she must be his wife, because no one would ever sport with his own sister, there’s no precedent for that, and the king promised Isaac he’d kill anyone who touched his wife, and everything worked out great because the Lord blessed all this and wanted them to be fruitful.

So Isaac and Rebekah had twin boys and those two went at it with each other before day one. Whoever was first out of the womb got the birthright (cows, goats, honor and glory and such) and apparently they knew this in utero. This was troublesome to Mom who had the audacity to ask the Lord why things had gotten so rough and unruly in there and the Lord explained “Two nations are in thy womb, and two manner of people shall be separated from thy bowels.” 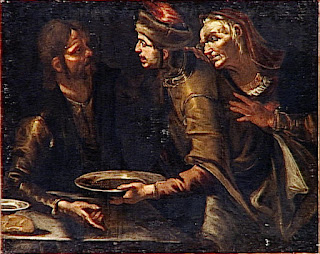 Women really do not get much of a break in this book.

Esau squeaked out first but fairly promptly sold his birthright to his brother for a bowl of lentil soup. Basically, Jacob wasn’t that nice and Esau wasn’t that bright. Also, they kept trying to kill each other. Eventually, Esau married two women from out of town, but nobody including God liked foreigners, so any thought of getting that birthright back was out of the question, because it was important to keep those lines of descent pure, if incestuous and homicidal.

We are not thirty pages into this tome. Already I have the vapors. I swan.