The Gospel According To The History Channel 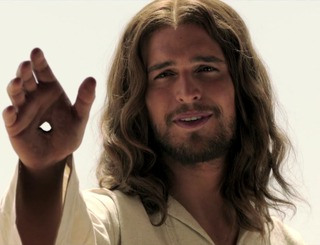 Hey, I happened on the showing of The Bible on the History Channel the other day. Just cruised through the channels and there it was, right before the Big Bang Theory. It’s a miniseries, and I didn’t get in on the beginning at all, but that’s okay–I’ve read the book. Everything starts out dark, and then it gets light, and then it gets wet, and then there are giants and lions and stuff. By the time I tuned in, we were all the way up to Jesus. I like Jesus.

They seemed to be doing a pretty good adaptation, as far as I could judge. Jesus was markedly lighter than everyone else, so as not to look too Jewish, and also gorgeous, a hippie mama’s dream. He had the hair parted down the middle and all the things we’ve come to expect. Because we all know just what he looked like. There are pictures. We’ve taken his appearance, if nothing else, on faith for years. In fact that was our main talking point in the late sixties when our parents were telling the boys to get a haircut. “But Jesus had long hair,” we said, as if we knew it for certain. Of course, there were no paintings of him done en plein right then and there. When Isaiah prophesied about him, he said he wasn’t going to look remarkable in any way. A few hundred years after he died, people thought about it and decided he was kind of handsome. Various bits of fabric had turned up for veneration, if not laundering, upon which an image of Jesus’s face had gotten smeared. By the fourth century, he had a beard in the East, and didn’t grow one in the West until 1200 A.D. But he’s stayed pretty much on the same template since then.

Anyone who has read Murrmurrs for a while knows that I’m going to get all crabby about them taking the screenplay from something more modern than the King James (God’s) version. It’s a pity. I know they do this because they think the KJV is just not as accessible to modern humans. But I like my language to have music in it, and using the New Revised Improved Standard Always-Low-Prices Version rankles. We’re only one more movie version away from the Heavenly Host singing Boo-yah, and next time when Jesus holds his puny basket of loaves and fishes up to the sky for God to have a look at, he’s going to bring it down laden with tuna fish sandwiches, sliced on the diagonal. 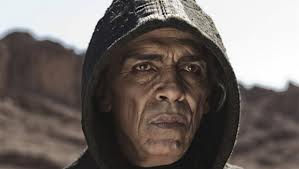 Other than that, the miniseries was fine. They did darken up Satan a gratifying amount. He looked a lot like Barack Obama. And tax collectors were properly revealed to be the lowest form of life. It was the Gospel According To John. Boehner. Except for the helping the poor part.

I missed the final episode, which miraculously aired on Easter Sunday. I’ve got a good idea that things took a bad turn, but (spoiler alert) it all turns out all right. Then we were going to go headlong into St. Paul’s Revelations, so hold onto your hats. That calls for a lot of special effects. I think it’s cool. These days, we just don’t give as much respect to our schizophrenics as we used to.