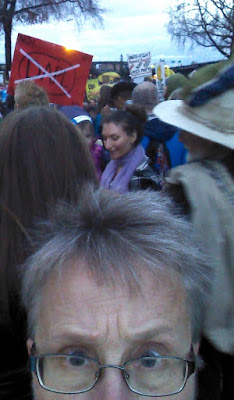 I saw the results, and I said No. I wanted to stand, march, be in the company of those who were living this horror with me. This waking-up-in-the-night and this nausea and dread. To say No. No. No. No. No. It was important to be on record as saying No.

I’ve had second thoughts. Actually, just one tiny second thought. I saw a video once: an ex-convict was ministering to the incarcerated. He approached a man in the front row and brandished his fist. The man grabbed it. The minister pushed. The man pushed back. Hard. They were equals. Then the minister gave in, utterly. He let his fist subside. The man immediately quit pushing, and was astonished that he had. “This is your choice,” the minister said. “You can push back, and that is what you want to do. But it’s not your only option.”

I’m not advocating surrender.  What I see is that people are persuadable. But they are never persuadable when presented with a fist. When we assure half the country that they’re idiots and we alone hold the keys to the truth, half the country will push against our fist. We do the same thing. We’re all dancing lewdly to the disco-beat of our own righteousness. It feels good, but we will never get where we want to be if we continue on this path. And where we want to be is too important to be sacrificed to our vanity.

I first thought about this when Obama spent so much time with the president-elect in the White House. It could have been a short visit. Lord knows, an awkward one, with the president in the same room with the man who pushed the birther lie about him for years and years. But President Obama is a wise and cool man. He has things he’d like to see accomplished. And scolding or snubbing the incoming president was not going to see them done. I like to imagine he was sympathetic. There’s no reason to suspect otherwise: this is a man who puts himself in other people’s shoes. Trump is in way over his head, and–at least right now–he knows it. He needs help, and I like to think Obama gave it to him. He laid out the complexities of the job, he sympathized, and he offered advice. First thing Trump said after that encounter was that he was looking forward to consulting with Obama in the future.

We know this guy.  If Obama had been at all condescending, he wouldn’t have said that.

I like to think Obama gently let him in on some difficulties with abolishing the Affordable Care Act, with tearing up world treaties, with governing by dictat. I like to think he might even have suggested that there was more to this global-warming thing than a hoax by the Chinese, and that he might have a place in history if he led us in the right direction, and that he was in a unique position to do it. Trump might like a place in history.

Next thing I read is that Bernie Sanders offered his full support if Trump actually wanted to take on Wall Street. My friends on the left were outraged. Bernie had sorely disappointed them. Why? Because you must show your fist to the enemy! Then your enemy can push back. Now we’re all pushing, and we get nowhere.

Except all Bernie said was he would support Trump if he wanted to take on Wall Street. What? Are we those people? Are we the ones who would obstruct Trump even if he manages to do something right, just to make sure he fails? I would like to imagine that Trump would be interested in collaborating with Bernie. He campaigned on similar issues. It would show him to be nobody’s puppet. He might be in a rare position to get something accomplished, particularly if he gets credit for it. I suspect he’d like that.

Listen. Trump might have some blank spots on his slate right now. He hasn’t thought that deeply about anything. He seems persuadable, at least a little. He’s already demonstrated that by backing away from some of his campaign promises. Instead of supporting this, some on the left are hooting about it and reminding his supporters that they’re chumps. He needs help, and right now he knows it. But he’s also prickly. Tell him he’s a moron, and he’s not going to respond well.

If you subscribe to the Clicker Method of animal training, you always reward the behavior you want–even feints in its direction. And you fail to reward the behavior you don’t want. That doesn’t mean you punish the animal. Sometimes it means you just don’t give it the attention it craves. It works for people, too. Your elderly mom calls every night to complain about everything? You don’t tell her it can’t be that bad. You don’t tell her to perk up. You give her nothing, just let your voice trail off. Then when she says something more upbeat, you get all enthusiastic. Within a matter of days you’ve retrained your mom. 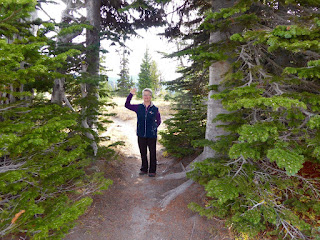 We are at an unusual intersection here. I don’t have much hope. I deplore everything Trump claimed to stand for–but I’m not sure he was that invested in any of it. He was doing a reality show with himself as the star. He was giving the people what they craved. Yes, we must stand up for tolerance. Yes, we must stand up for civil rights, and our fellow citizens, and we must stand up for our beleaguered planet, every time we can. Yes, we must fight the evil ones among us who are encouraged by this man’s mindless bluster.  Things don’t look good, and we will have many opportunities to resist, to make our stand. But if, on any issue–say, he wants to replace Obamacare with single-payer–this guy gets a notion he wants to be a hero, I intend to let him.