The Harbinger Of Spring Is A Binger 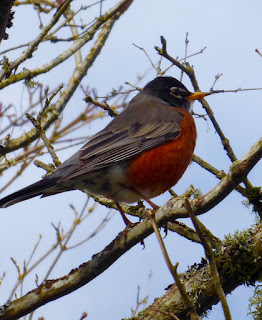 I can’t say I always notice the first robin of spring. All of a sudden there are packs of robins around and I wonder how long they’ve been here.

This year we’re awash in them. They’ve taken over entire trees and they’re scattered in bright bunches all over the ground. The sun is peeking out, there is the promise of warmth, a loamy fragrance is in the air, daffodils are pushing up, and a young man’s fancy lightly turns to the same thing it was turning to all winter; in short, it’s springtime. And I look out at the robins, and I have the same thought everyone else does: have you ever seen such a collection of fat fucks in all your life?


My goodness, but they’re corpulent. Everywhere you look, a red red robin is blob-blob-blobbing a lawn. It has to be the worms. Our chickadees are stuffed with seeds and look like adorable little Steiff toys, but robins are packing earthworms, and boy do they look it. They’s paunchy. And no wonder. Except for a sparse allotment of random, inconsequential organs, earthworms are just big tubes of goo. And they can be huge, particularly in comparison with a robin. It’s like if you or I ate a sleeping bag filled with pudding. 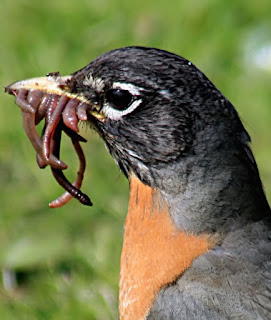 The American Robin’s real name is Turdus migratorius, which doesn’t mean what you think it means. Turdus comes from the Latin for “flush.” Sorry, I meant “thrush.” And migratorius is from the Latin for “to go.” Okay, it does mean what you think it means. The robin can have two or three broods of babies per season, building a fresh new nest each time, probably because of the weight gain. The female lays three to five eggs. Amazingly, they’re robin’s-egg blue.

Robins generally hunt by sight, but presumably they can hear earthworms scootching around below the surface too, and then it’s just stab-and-yank and down-the-hatch. Hard to tell how the earthworm feels about this. I personally know you can cut an earthworm in half with your thumbnail and string it on a fish hook, and both halves continue to visibly object for quite a long time, but they don’t seem to die. They do indeed have a mouth and an anus and those are on opposite ends, so you’d think it would matter. But in fact, the only dead earthworms anyone ever sees are in the form of either dried-up crackers on the sidewalk or robin poop.

They definitely do not appreciate being dry. When they show up in huge quantities on the ground after a rain it’s not because they’re drowning  in their little tunnels. They like moisture. They’re just taking advantage of a nice wet situation to make a little better time topside, but it doesn’t always work out for them. They can be stranded on a sidewalk in numbers sufficient to prevent a small, sensitive girl from being able to walk all the way to school, and have to return home in tears just as her mommy was relaxing with Arthur Godfrey and a donut. Or so I’m told. 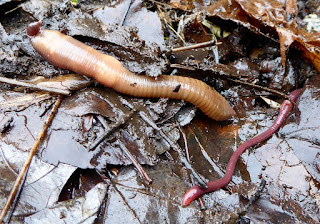 There’s not a lot to an earthworm other than the goo, but even the casual observer will have noticed that thick portion that looks like a belt. This is where the sexual parts are kept, and all earthworms have both male and female parts. Even so, they do get together to swap sperm by holding those thick belts close together. The belt is called the “clitellum,” which probably does mean what you think it means. The really cool part is that, after the mating, the clitellum then secretes a whole different layer of goo in a ring around the worm, which the worm dumps sperm and eggs into and then subsequently wriggles out of, as one would expect, since this is the earthworm equivalent of the wet spot. The abandoned ring closes up and becomes a cocoon for the baby worms. For a goo-based life form, it’s right tidy.

This copulatory act would seem to be an opportune time for a robin to get a two-fer, but worms generally mate at night. And the big feathered fatties have to sleep it off sometime.