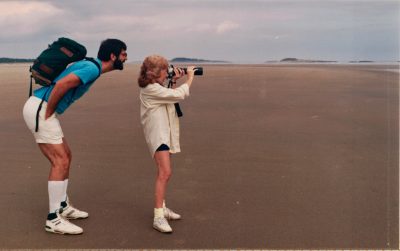 In terms of her earthly meat suit, and in no other way, my sister Margaret was a small person, but on this day she seemed to stand tall, turgid with pride. “I did that,” she said, pointing down. “I did all that.”

My memory no longer supplies the method we used to find her septic tank, but with a minimum of probing and digging, we had it flayed open. She couldn’t remember the last time she’d had it pumped out. It wasn’t required, mostly. The good earth seemed well able to keep up with her minimal contributions, and she lived alone. Naturally, the signs that the trusty tank did need some relief had appeared when she had company. Us. Could be we put it over the top. Nothing would surprise me less. Dave and I might not look like productive members of society, but we have our areas of expertise.

Still, most of what we were able to see before us had been filtered through my sister. As someone who rarely has all her shit together, I found this a marvel of concentration. “This is impressive,” I said. “It really needs a name. A personal name, because it’s your own personal creation.”

I don’t know which of us came up with “Margrunt.” Plant the flag!

Humans have had to come up with ways of contending with their effluent. Sewer systems are top of the line in terms of getting the stuff well away from us. Ideally they terminate in a sewage treatment plant attended by government workers and birders. The birders don’t add much to the ambience but then again sewage treatment ponds already have plenty of ambience. The ponds are very attractive to all sorts of birds because they’re reliably full of water and, let’s say, nutrients. And bugs.

Outhouses prevailed not that long ago. If you had an outhouse, the pit below it eventually filled up and either had to be dug out for fertilizer or capped off and a new potty hole dug somewhere else. People probably didn’t stand over them at that point with pride as much as resignation.

We had a flush toilet at our mountain cabin but we sure didn’t know where it all went. As long as it went away we were content to remain ignorant. Naturally the time it didn’t go away was when we had company—it’s a theme, with toilets—and after Dave and Scott made like human pistons with plungers going in parallel in the toilet and the shower stall, to no avail, Dave had to go digging. Find the soil pipe and follow it to its conclusion. There’s not a lot of motivation there—more stick than carrot, I’m guessing. But he did locate a shallow septic system of sorts, with perforated pipe, and no tank per se. The drainfield was defined by a buried brass headboard, random household junk and sheet metal, and topped with a boxspring. The logjam hadn’t come out of us, but out of nature: some sort of backup of roots and other botanical debris. Once that was cleared the sucker worked fine. Soil on Mt. Hood is all made up of fir duff and salamander farts and periodically jiggled by earthquakes. You wouldn’t bother to do a perc test up there any more than you’d test for gravity.

But let’s get back to the Land of Margrunt, an eight-by-four-foot sovereign state. No one else in the family had their own personal stank tank, but if we had—surely we would all have names for them. Wouldn’t we? What would you call your proud creation? Your poopfolio? Your scatalogue? We wondered. Maybe other families get together and play board games: we label our loos. And now we’re ready, all the remaining Brewsters and Brewster-adjacents: me, Dave, Elizabeth, Bobbie, and Reed.