The Layover Trilogy: Estee Lauder Is Dead But She Still Looks Good 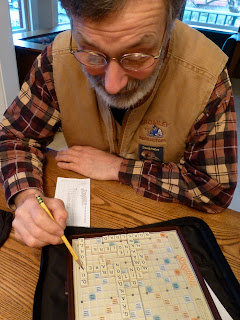 There isn’t as much to do during an eight-hour layover in LAX airport as you’d think. Once you’ve learned everything you can about your immediate environment, all that’s left is to learn it over, harder. If you happen also to be playing Travel Scrabble with a man who always wins because he takes up to forty-five minutes to consider what move will jam the board up the worst until you’re so sick of looking at the game that you drop in some dumb-ass word as soon as you get the chance so that it will at least appear that time is not standing still–say–you have lots of time to study your surroundings.

Such as an enormous ad for Estee Lauder Perfectionist wrinkle cream featuring an attractive 23-year-old model who, indeed, seems to have her wrinkle problem well in hand. The ad proclaims that their product is “the first wrinkle lifting serum using CP+R technology,” and I have no basis upon which to dispute it. In fact, I suspect it is true. There may be only a limited number of wrinkle lifting sera out there, and even if one or two of them use CP+R technology, they probably wouldn’t say they were the first unless they really were. Such a bold statement, so easily disproved. And they mean business–you can tell because it’s a serum. “Save the serum!” the mortally wounded scientist hollers into the wind as the precious bottle goes whacketing down the swollen river and the life of a major protagonist hangs in the balance. Serum is serious.

My companion places five tiles on the Scrabble board, hesitates for several minutes with his finger on the last, and peels them back off again. 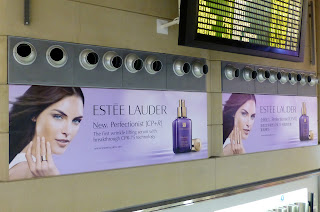 But wait. “Serum” specifically refers to the clear fluid obtained from various animal tissues, such as blister goo, or blood with the red crunchy bits taken out. Can Estee really go around claiming to have rendered the snot out of critters for her potions? I decide that the word is being employed in a poetic manner, in the service of marketing, and as long as no outrageous claims are being made, no harm is being done. “Goo,” after all,  would not have the same emotional appeal to a potential customer facing the heartbreak of looking her age. Estee gets a pass, I conclude charitably, as my companion places his tiles and begins laboriously to tot up his score.

He has used all his letters, and yet five of them are adhered to other letters in such a way that there is no real opportunity to hang any good words on them. I slap down a word in a clear spot devoid of bonus squares, squandering my “X.” I fire up the wrinkles between where my eyebrows used to be, and resolve to get to the bottom of CP+R technology. I look it up. CP+R stands for Correct, Protection, and Repair. That’s irritating right  there. Why not Correction, Protection, and Repair? Or Correct, Protect, and Repair? Get me Edit!

But then it gets interesting.  Perfectionist is made of a patented combination of natural artemia extract, whey, and Chlorella vulgaris, which is not, as it sounds, something you might pick up in the locker room at the Y, but a micro-alga. Which means that for only ninety bucks per eensy beansy bottle, you can rub your face with a paste of cheese, pond scum, and dead brine shrimp. Brine shrimp live in very salty water and yet rarely come out wrinkly; they may be on to something. 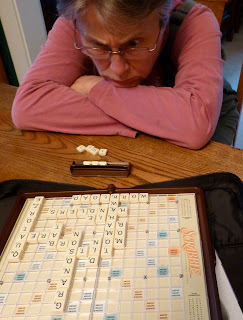 After four weeks of applying the pond scum-brine shrimp-cheese serum, the skin looks (it says here) redensified, and its collagen-building power is doubled. I haven’t asked my skin to go to any extra trouble for me, so its power, doubled, would still be zero. Also, one is advised to “pay particular attention to your deepest wrinkles.” Which, I don’t know, seems as though it could go without saying. I’ve got another four hours before I have to even think about finding my gate.  Plenty of time to imagine which hopeful customer, in receipt of an extravagant bottle of ointment, decides to dab a bit in the laugh lines at the corner of her eyes and trust fairy poop to fill in the big suckers.

My companion, with due deliberation, lays out his last tiles and collects an extra eighteen points for my stranded letters. The skin between where my eyebrows used to be knits up in a serum-defying way. I’d try the stuff myself, if it were free, and came with a beer.