The Layover Trilogy: The Rosetta Stone 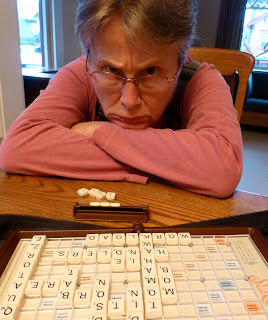 Five hours into my eight-hour layover in LAX, I have begun a new game of Travel Scrabble with my companion. Travel Scrabble is compact and ridgy so that the tiles will snap into place and not become dislodged if the board were to, say, suddenly sail through the air toward the Cinnabon dumpster. The board is clear. I have one vowel and two possible three-letter words. I had already decided to take at least fifteen minutes for my turn in order to give my companion some much-needed time for reflection. After a minute I have bored myself and snapped down my word. My companion leans back, cracks his fingers, and settles in like a bear in winter. I drift. 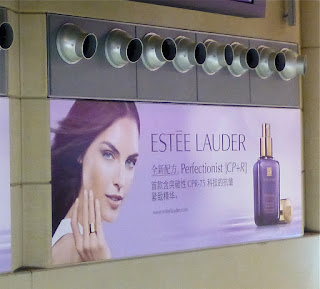 We are in the international airport. The Estee Lauder ad for Perfectionist wrinkle lifting serum shines from every single wall. But wait! Could it be? They are not the same. Yes: each one is in a different language. A completely different alphabet! My lord. It is the Rosetta Stone. Right here in LAX. A good scholar could, given enough time, discover the key that unlocks almost any language. Could discover how to say “New! The first wrinkle lifting serum to use CP+R technology” in every tongue known to mankind. Right next to the English version is an ad using some kind of characters. Letters in our alphabet correspond to sounds, so that speech can be transcribed. Characters may have nothing to do with sounds. They’re called characters because they’re like little personalities all to themselves. They’re pictures. Of things, mostly. So there may be a stroke that depicts “tree” and another that depicts “woman” and we’re supposed to know if this character represents Mother Nature or Dry, Scaly Skin. Not only that, but instead of reclining comfortably across the page like letters, the characters are strung up by the neck, and it’s up to us to see how they’re hanging. The system is almost completely inscrutable to all but about two billion people, so this is a rare opportunity for someone with a lot of time between flights to crack the code. 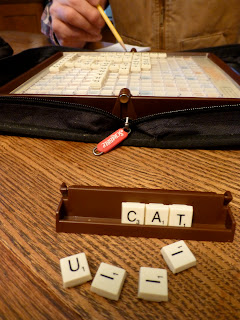 It’s not easy. The stroke for tree, for instance, can mean tree, or maybe, because of implied height, “basketball-player,” and the stroke for sky can mean sky, or, possibly, the concept of “strategy,” which apparently used to sound like the word for sky a few centuries ago; and with the addition of a small dash halfway up the tree-stroke on the right (“squirrel”), suggesting quick movement, gives us the character tree-squirrel-sky, or “pick-and-roll offense.” Not to be confused with the character with the squirrel-dash placed higher near the sky (“bat”) or at the base of the tree (“plummet,” “rabies,” or “a walk in the park”). It is a system without mercy. Sloppy penmanship dooms the author to obscurity.

This Rosetta-Stone business is serious scholarly work. It takes a lot of concentration, and there is no guarantee a person can pursue it and prevail at Scrabble too, especially when playing with a man who has no sense of the passage of time. Especially when he has a nicer rack. 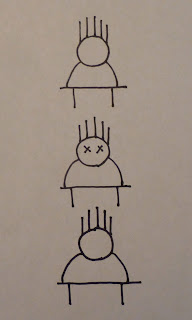 Look! There is a whole little mob of characters on the Korean version, all corresponding to the compact English “New!” I study, and after a few hours, its mystery is revealed: Dear Leader on a pedestal, Dear Leader on a pedestal with X’s over his eyes,  and then Dear Leader on a pedestal again. A native speaker will get it right away. But what a load to lug around, in place of new!–a slim dart of a word from a git-er-done language. New! Crisp, sharp, pins its meaning to the mat and rolls off, ready for action. Yeah, baby. That’s my language. Big, muscular, agile English, all swagger and punch, and home to a thumping vocabulary, a treasury of words stolen from everyone and everywhere, the echoes of one conquered people after another. And words admired from a thousand voyages and stashed into the luggage on the way home. They’re all ours now, nimble, sly, supple, and all of them slingable. Like the choice chunk of Middle English that I could sling at this Scrabble game right now. If I had a “U.”