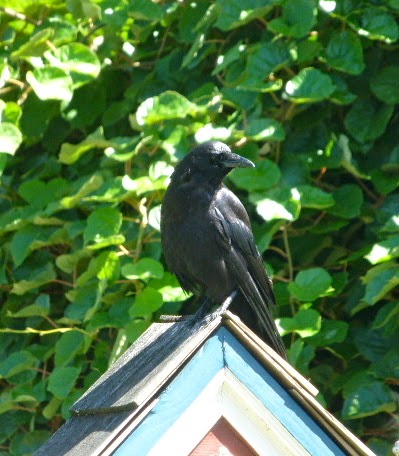 Dave has little buddies all over the place. Almost anything has little-buddy potential, and being technically alive isn’t even a requirement. So at some point he’s likely to address anything from Pootie to an interesting bug to a massive bricklayer as “my little buddy,” and responses vary. Not everyone is as responsive as Pootie. There are days Dave doesn’t even get an antenna-wave out of it.

But we both thought we might be able to develop more of a relationship with a crow. We had three or four that lived in the big Doug fir next door, and we set about making little buddies out of them. Crows are smart. If a crow can count on you for a cracked walnut, a crow is going to remember you favorably. “Hi there,” we sang out, while placing a walnut in plain sight. The general goal was to have one or more of our crows approach us and say “hi there” to us–they’re good mimics–and we’d give them walnuts. It seems like good luck to have a crow or two in your corner, in case there’s trouble. 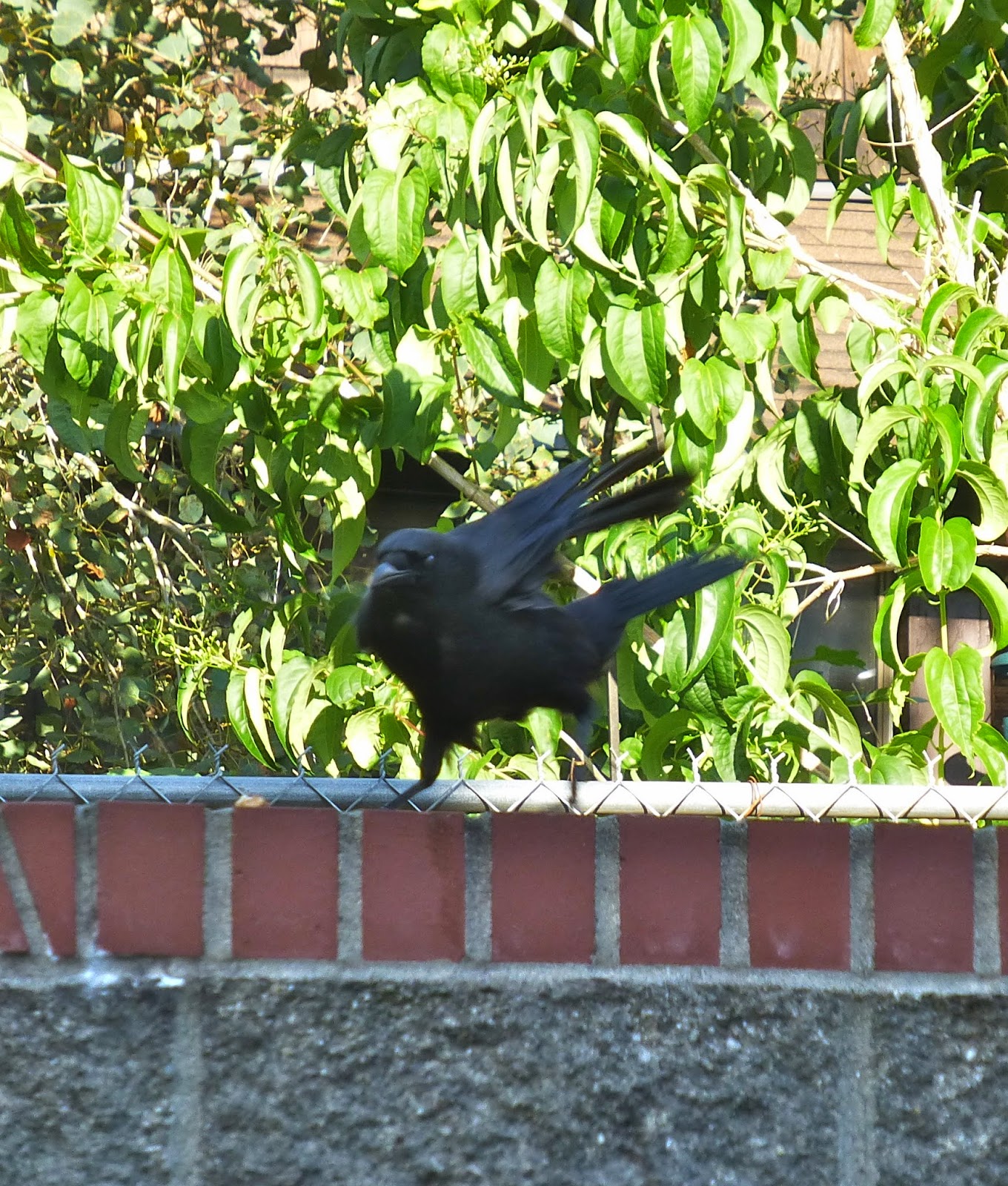 They grew to know us, all right, but they were cagey about it. A crow would perch on the wire, I’d come out with a walnut and say “hi there,” place the nut on the wall, and the crow would studiously look the other direction until I backed off. Then he’d pop down for the walnut as soon as it could be reasonably construed as his idea. “I have some important business to conduct,” the crow would think, “and I’ll just grab this nut here while I’m on the way, because I’m an efficient person.” Crows are proud. Still, we had a notion they would come around eventually.

After a bit I thought we could improve on “hi there” as a signal, especially if we wanted to hear it back from the crow. “How about if we say HEY! WALNUT BOY! That would be cool,” I suggested, but then I thought about it some more. “Unless they can’t pronounce W’s. Can crows pronounce W’s?”

Or we could start offering them filberts.

At any rate, although our crows were willing to accept our walnuts promptly as long as we didn’t stand too close, we hadn’t made much progress on the little-buddy project. And then they went away. They were just gone. Ours, anyway; there were plenty of other crows flying over.

Last week we went on a walk and I found a large dark feather. Two blocks later I found another one, and then more and more. They were all over the place. We appeared to be tracking a naked crow, and nudity is the kind of thing that would knock a lot of the swagger out of a crow. We began to examine the crows more carefully. They all looked like shit. Their tails had gaps. Their breasts were motley and ratty.  They seemed even less willing than usual to launch from the lawn, but they still had the swagger working. They were like the dude at the party who plucks at the sprung threads in his tweed jacket and explains that he’d been in line for Department Head but didn’t want to sell his soul to the tenure track. 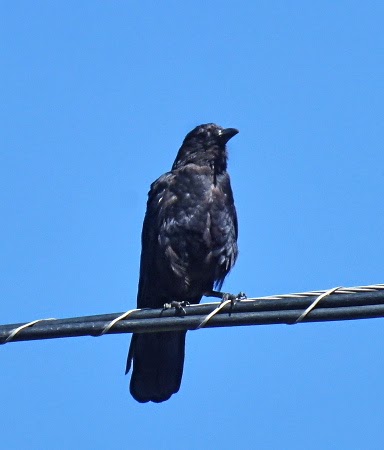 Crows gotta molt sometime; everyone does. Birds have to change their suits once a year at a minimum. A lot of the birds at the feeder looked like shit too. It happens. The crow gave me the once-over and studiously turned his head to the side. Whatever, dude. “You look like shit,” I told him, in all sympathy.

At least I know where our crows are. They do know us after all, and they’re proud. They’ll be back once they spruce up. Dave will walk out into the back yard one day soon and a crow will land on the wall and say “you look like shit.” And Dave will give him a walnut.