You know how something seems unthinkable, and then someone thinks it, and then more people think it, and after a while it starts to seem normal? Like mass shootings. No one used to think about that at all, but somebody got the ball rolling and now it’s a Thing.

So I really resisted a lot of what Trump was saying but now I’m kind of getting the hang of it. Sometimes the simplest solution really is the best solution. And it doesn’t get any simpler than defining your enemies using the broadest brush possible, and walling them off, registering them, killing their families, and otherwise making them all really sorry for frightening you. How hard can it be to get a handle on a billion Muslims when they all have to kneel down and pray five times a day?

Well, I don’t have much of a grudge against Muslims, but it doesn’t take much thought to look around at all the threats in the world, large and small, with a clear eye, and recognize the common denominator. Men. We need to do something about men. They’re scary. Not all of them, but until you know for sure it’s best to just lump them all together and keep an eye on them. Worst thing a woman’s ever done to me is compliment me on my haircut and not mean it. But the stalking and grabbing and raping and bombing and torturing and general death kind of scary–it’s pretty much always men.

A lot of the good old strategies are making a comeback. Newt Gingrich, an antique pasty white guy, just suggested we should bring back the House Un-American Activities Committee, for instance. His activities put him in no danger, since there’s nothing un-American about infidelity, or, as he prefers it, “proactive engagement with future wives.” He also complains that America has become too secular. He’s already been Lutheran, Southern Baptist, and Catholic, himself. The man really can’t get enough sects.

There were so many good ideas from back around World War II. The most promising for today’s problems has to be the Japanese-American internment camps. That wasn’t a popular idea at first because for the most part people in the western states were fond of their neighbors, but after Pearl Harbor, those same neighbors began to look a whole lot hinkier. They were easy to round up, too, because the Census Bureau ratted them out, even though the information was supposed to be confidential. The Census Bureau flatly denied doing it, however, until 2007, in a fit of retroactive truthfulness. But they still probably know where all the men are. 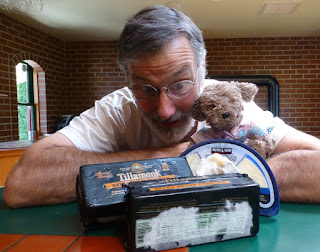 Even with everything that’s happened, a lot of us would probably balk at stashing all the men away somewhere–a lot of us find them highly decorative–but all it will take is one more Pearl Harbor moment and we’ll get everyone on board. Where to stash them, though? We want to avoid cruelty–that’s not who we are, inside. We just want them quarantined for our safety, and maybe we can make off with their stuff, too. So I suggest some kind of cave. Men like caves! There’s already a huge cave under Missouri that they use for cheese storage. Men like cheese!

I’m telling you, we’re one cable hookup and a taco shipment away from solving the whole thing.