The Near-Death Experience, And Them What Love Them

It was a wildly successful trip we took to California. We accomplished all goals. We wanted, depending on which of us you asked, to ride roller coasters, or stand on the ground near them. And we wanted to visit friends. Good friends! One was a former boyfriend of mine, something I have in common with his husband. And two of them I married. Signed the certificate and everything.

It was Beth and Dean who ferried us to Six Flags amusement park. The way it works, you hand the people a wad of cash and they let you in, and then you can ride all the rides you want. Ordinarily this works out to about a thousand bucks per ride, because the lines are so long. But we were clever, and arrived the day after Halloween, which is a major holiday in San Francisco. Every adult was too queasy to contemplate a thrill ride, and the kids can’t drive. We had the place to ourselves.

Wasting no time, Dean and Dave shot off to the first deeply terrifying ride they could find, and Beth and I sat down at a table outside a snack bar because it looked like it wasn’t going anywhere. We lost sight of the boys, until Beth spotted them way off in the distance, upside-down against the sky. Beth would make a terrific birder.

Neither of us really understands why a person would want to get on these rides, but there are plenty of people who do, and many of them are not despondent.

Beth and I did gamely agree to climb aboard a tiny roller coaster that didn’t get any more than six feet off the ground. Unfortunately, I still couldn’t handle it. That sucker was taking the corners just a little too fast for safety, if you ask me. An hour later, I consented to strap myself into a flimsy bench seat and go way the hell up in the air and sail slowly around in circles backwards. Maybe some people wouldn’t find that frightening, but they lack imagination, and do not realize that all the straps could conceivably disintegrate at once and then all they’d need to do was climb over the bar and jump off, and they’d be pizza. 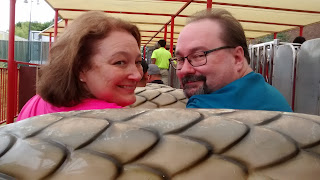 Perhaps it makes no sense for someone like me to go into such a park, but in my defense, I had a good idea there’d be ice cream in there, and I was right. And it did my heart good to see those men smiling as hard as they were. And they were. I still don’t get it. Why do some people want to feel as though they’re about to be killed?

“That’s just it,” Dave explained. “You might feel like you’re about to die, but your brain knows it’s not true.” 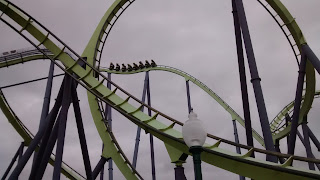 I looked it up. Although there is no consensus on the reasons some people are so enamored with thrill rides, it’s generally agreed that it’s hard-wired in. In some cases, experts guess, people like to feel as though they are defying death. Whereas I prefer to defy death by going about my daily business while not dying. 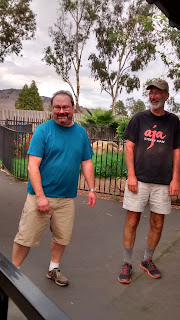 Others speculate that thrill-seekers tend to depression and anxiety and feel relief only when they are forced to be in the present, experiencing immediate terror and not worrying about the future. Also, they have a different relationship with their brains. They have a powerful compulsion to stimulate their own amygdalas, and while I might not understand it, I am willing to accept they are born that way. Who am I to judge? Would I want to stand in the way of a thrill-seeker getting a few hours’ respite from the daily wretchedness that is his life? No sir I would not.

Not as long as there’s ice cream.