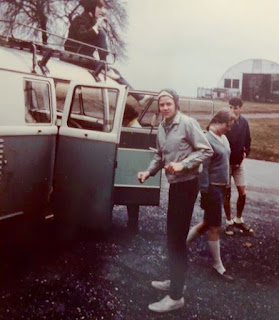 Someone from the Hostel Club. I’d heard about the Hostel Club soon after I enrolled at Yorktown High, in tenth grade. When they had their first meeting of the year, I summoned the gumption to check it out. This was a club devoted to hiking, and bicycling, and canoeing, and camping, and staying in youth hostels. And jollity. I had found the social scene intimidating since sixth grade, but so did these people. They all seemed to be taking AP math and physics courses and being nerds and they were smart as hell and even funnier than hell and completely incapable of fitting in with the In Crowd. I fell in love with all of them at once. Every outing was like a mass date with all the fun left in and all the anxiety stripped out. We were a posse. But I wasn’t sure where I stood, being new. And young. Most of the members were seniors, and I was not only a sophomore, but the youngest in my class by as much as two years. 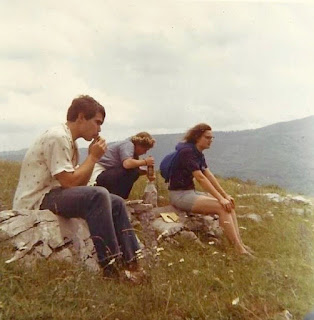 But when I peered out my bedroom window and saw my new friends about to let fly with a handful of gravel, I realized: Yes! Lord love a salamander in springtime, I’m In With The Out Crowd!

“We’re going to Carderock,” Lynn stage-whispered. “Got any eggs?”

Problem. It wasn’t as though I could just leave the house, with eggs, like a big girl. I had to wake up either my mother or my father–I reviewed my recent experiences with both and refined my tactics–and ask if I could pile into Lynn’s VW bus two hours before dawn and head off to the park with a bunch of kids and some eggs. I didn’t like my chances. My parents were stoutly aware that I was younger than everyone else in the whole world and they had all sorts of rules that didn’t apply to anyone else I knew. For instance, I  had the curfew of a novice nun in Las Vegas. None of this seemed fair to me because I was, at the time, as old as I’d ever been, and besides, they were largely if not totally responsible for my age.

I must have chosen the sleepiest and least wary parent to poke because, after a brief explanation that included neutral or cheerful words such as “breakfast” and “dawn” and “real careful driver,” I got the go-ahead. And then asked if I could take some eggs, also not a sure thing in a family on a tight budget. I could. 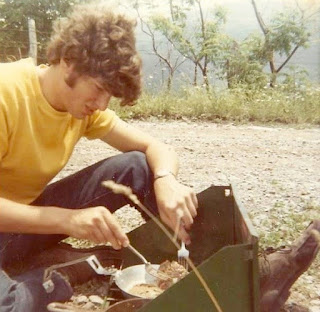 It was my first People-Bop. I’d heard rumors. A kernel of two or three Hostel Clubbers would hatch the plan to kidnap their friends in the middle of the night and go play by dawn’s early light. The kernel would always include Lynn because she had the VW bus. She was a real careful driver, but it’s not like every now and then we wouldn’t try driving with one person blindly operating the gas and brake with his hands, one person leaning over from the back seat to steer, and Lynn barking out instructions from the driver’s seat between snorts of laughter. A successful People-Bop required some familiarity with people’s bedroom locations, and just after I’d joined the bus, we screwed up at Bob’s house when we graveled his father’s bedroom by mistake. From inside the halo of our own high spirits, Bob’s father seemed to lack a sense of humor. But we still scraped Bob out of it, and just about when the sun was peeking over the horizon, we were at Carderock Recreational Area, cooking up eggs and bacon over camp stoves and having a high time. 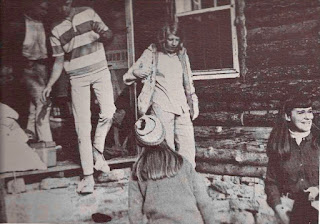 An hour later ropes had been anchored on the nearby cliffs and several, if not all, of my friends were rappelling down the sheer face in exuberant leaps, like spring frogs heading for the wetland. So I gave it a go. I thought: the worst part is just letting yourself go over the edge, and then this miracle of rappelling will simply happen. It didn’t.  I was unwilling to allow myself to be perpendicular to the cliff and I teetered back and forth on insecure pins, making bargains with God I would abandon within days, and hit the ground and the end of my rock-climbing career at precisely the same moment.

But that’s the kind of thing the Hostel Club did. I’ve had great friends through the years, but none that came in a complete set like that. Maybe it was our youth. Or maybe we really were that special. Could be I’ll find out.

Because the great, grand People-Bop of all time is coming up soon. Four or five of us located each other when Facebook came on the scene. Some of us had still maintained ties with outliers. And when we decided to try for a reunion of the Hostel Club, 45 years later, in the Adirondacks in July, somehow we managed to scour the planet and achieve a critical mass. People are flying in. Driving in. Bob, whose father has either moved on or passed on, is going to bike in from New Hampshire. We’re tickled we actually located him. Not one of us, though, all in our sixties, is surprised he’s coming by bicycle.

We’ll see. We won’t have youth on our side. We’ll have everything else.