The Reign Of Rain 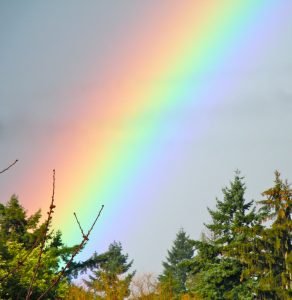 People complain a lot about getting other people’s weather by mistake. It doesn’t sit right. Maybe you picked your home for the climate, and to have someone else’s weather foisted upon you feels unfair. Also, of course, the whole idea of getting all the wrong weather is kind of a sign of Everything Having Gone Badly Wrong. Hundred-year floods really aren’t supposed to come every other year. It’s one of those the-call-is-coming-from-inside-the-house moments.

Our weather is weird enough anyway. We have hail that is specifically attracted to peonies. We have “sun breaks.” One day we had a torrential downpour on the west side of our house while the east side remained not only dry but sunny. It’s not that big a house.

Just the other day we had so much rain at once that there was no space between the drops. Minnows flocked by. Anyone looking up in surprise drowned. At the exact same time, a fat, unimpeded sun blasted right through it all. I ran up to the tower for the rainbow, which had to be world-class. And it was. The rainbow cracked the sky in half; the lower portion calved off and clattered onto the ground; it was a while before the atmosphere reconvened and mustered a quorum of molecules. Meanwhile, no one’s heard from anyone in the lower rainbow portion since.

People here are excitable about thunderstorms. We mostly don’t get them. As a thunderstorm fan, with lots of experience from Virginia summers, I tended to scoff at the oversized reaction to our occasional thunder. Which is petite. You can’t always tell if it’s thunder or the sinister chuckling of the blackberries as they rumble over cars and buildings in the dead of night. 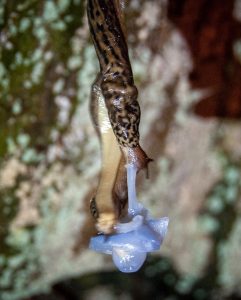 More commonly we have veils of vapor that manage to make everything damp without ever actually precipitating. It’s so quiet you can make out the orgiastic sibilance of suspended, swinging slugs in love, entwined in slime, their blue penises swirling softly. Not that I’m eavesdropping.

But back to those thunderstorms. We have them like we have earthquakes. Not big and not often. We save them up. We accumulate an anticipatory tension and every three hundred years the coast is upended and we all get tipped into the ocean like so much trash. Thunderstorms, same deal. We might not get them often, but when we do, our 200-foot fir trees wave like a stand of wheat, and Zeus signs his name in lightning.

And, of course, now we get atmospheric rivers. The term has been in use for only twenty years or so but they’re really something. Basically, you’ve got the Mississippi River up there in the sky over the Pacific, only with more water. A grand celestial Proud Mary presides atop, her big wheels turning, steering for the coastline, and the mountain range beyond. And that whole sky Mississippi looks at those mountains and says You know what? This has been no end of fun, but instead of climbing over those suckers, what say we just dump the whole load right here? Cue Tina Turner. This is going to be nice and rough.

Which is aggravating if it’s your town that gets shlorped off on a mud skid, but it’s still basically on the familiar side of things. Water is our legacy and our treasure, or at least it’s supposed to be, and if every so often it overshoots the mark, and we pick up a little stray Canada out of the deal, still—the basic premise is familiar. That’s the west coast for you—you can’t count on the land beneath your feet staying put. It’s going to slide away or crack open or get covered with lava. 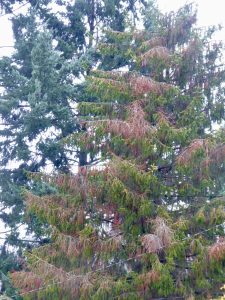 But at least being wet feels familiar and comforting. It’s the opposite that rankles. It’s when everything around you starts looking like a casserole someone forgot in the oven and then some middle manager from Hell says All THIS casserole needs is to be popped under the broiler for a couple days to give it a nice crust. And that’s not what it needs at all. It truly isn’t.