The Rise Of Mr. Happy 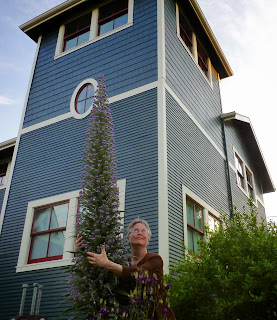 There was a time when we thought Mr. Happy would never rise up, would remain just a withered stump of a thing. But we were wrong. Mr. Happy is standing up straight and proud and pink, a little disheveled around the dark curls at his base, but still a sturdy spike of glory. He’s magnificent. One look at him and you can tell he doesn’t belong here. You can hike all summer long around here and not run into another ten-foot-tall tower of flowers. The other way to tell is to remember how many days Dave had to wrap him in a blanket with a light bulb for heat and read “Charlotte’s Web” to him last winter. It ain’t natch’l.

So I’m not getting away with anything here. If I was planning to get an official certification as a Backyard Habitat, Mr. Happy would put the lie to it. It would be like trying to shoplift a refrigerator under my overcoat. People can tell.

I’ve only recently become aware why someone would want to have a certified backyard habitat. Rules aren’t stringent. Someone needs to come by and see that at least five percent of your vegetation is native to the area. Five percent. Why would anyone want to have a garden with just the same straggly stuff you could see in the local woods anyway? Glad you asked. 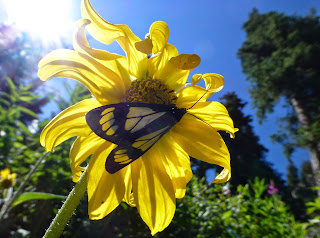 It’s a little lesson in evolution. Every living thing is trying to get along. Get along in life, that is, and not necessarily with each other. Definitely not with each other. It’s eat or get eaten. You have a plant that wants to eat sunlight, and a raft of caterpillars that want to eat the plant, the plant is going to have an opinion. And it’s going to back up its opinion with some chemical defenses. And sooner or later some branch of the butterfly family tree is going to do an end run around those defenses, and that’s where the eggs are going to be deposited. If the emerging caterpillars manage to chew the plants all up, then they’ve screwed themselves too. But if the birds pick off most of the caterpillars, leaving just enough of them to keep the butterfly franchise going, everyone makes out. What you are witnessing in a natural landscape is the truce that remains after everyone’s done duking it out.

This balance the plants and insects are achieving as they dance through time together can get to be pretty precise. Many butterflies are adapted to one host plant only. You start carting them out and replacing them with pretty flowers that evolved somewhere far away, you’ll find your insect population at a complete loss. You strip-mine the Midwest with Roundup so you can replace the native milkweeds with corn and soybeans, you’ll crash the monarch butterflies. They don’t have thousands of years to come up with a new plan.

This is not good news for the birds that are counting on the insect hatch to feed their own young, like 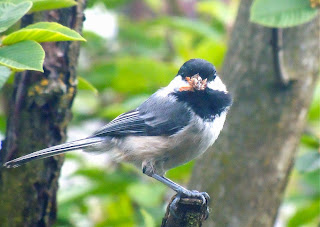 our chickadee friends, the Windowsons. It takes a whole lot of grubs to raise a baby Windowson. They’re hauling them in so fast it looks like Lucy Ricardo and Ethel Mertz doing an episode in a sausage factory. Visualize an endless chain of links pouring into the birdhouse. Your pretty new garden does not provide enough little green sausages for the bird population.

Fortunately for you, you don’t remember when there were ten times as many birds. Or ten times that many. That was in your mom’s era, or your grandma’s–might as well have been the Cretaceous. So you’re free to enjoy your exotic flowers. I know I do.