The Sky Is Falling And You Will Too

We’re in line for what the weathermen typically call a “wintry mix.” They call it a wintry mix because they don’t know what else to call it. People like to complain that we have the same weather day after day, but every now and then we just have all the weather at once, and that’s your Wintry Mix. It’s not imaginative. It’s like when the women’s magazines publish a new Christmas cookie recipe and they don’t want to come right out and call them Sugar Gum Goo Bars With Some Kind Of Breakfast Cereal And An Unknown But Hopefully Botanical Adhesive, so they call them “Festive Treats.”

People from colder climes like to bitch about how no one here knows how to drive in winter, but odds are they’ve never seen this before. They zip around in a nice grippy snow powder you don’t even need chains for. But not only do we not know what we’re doing, our weather doesn’t even know what it’s doing. It’s supposed to either come in a little warm from the ocean and rain all over us, or come in cold but dry from the other direction. When by chance we start to get some cold and some precipitation at the same time, the moisture just hangs up in the atmosphere rooting around in the glove box for the manual, and there isn’t one, and then it’s all finger-pointing and recriminations. Up top it’s crowded with snowflakes and they elbow each other until they start to fall. But then some of them come back up and report that there’s a whole warm layer down there and they’re falling apart, and then the snow on top says jeezy peezy just keep going, it gets colder at the bottom again, and they go back and forth and eventually everybody hits the ground as either hail or snow or sleet or Rice Krispies or plain rain–for a minute. Then it seizes up. Everything’s coated slicker than polished goose shit. If we could just put this stuff on the Hubble telescope we’d be able to see up God’s nose. 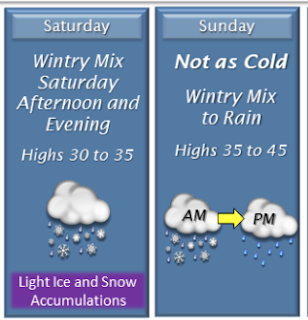 One of my last winters Moving The Nation’s Mail we had four days of this. By the third day the frozen rain had humped up over previous piles of Wintry Mix. It might have been possible to ambulate on something resembling an ice rink, but not this bumpy crap. Every step sent you three directions at once and your strongest tendons determined your trajectory. “I’ll walk you to the bus stop,” Dave said, as I headed off to the post office (during the dark of night, be it noted). “No need,” I said, “I can manage two blocks,” but then I disappeared briefly and turned up under the truck. Dave hoicked me back up again and we made it to the bus stop as a single four-legged teepee, and I showed up back at the house three hours later. The bus had made it about five blocks, sometimes sideways, and I’d demanded to be let off before it went downhill. The three blocks home took me a half hour to walk, plenty of time to determine my bones are not brittle. 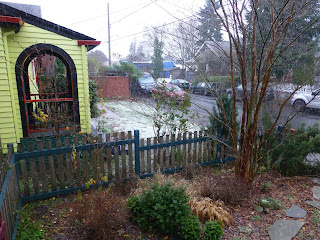 You show me a good Minnesotan who knows how to drive in that, and I’ll show you what the bottom of his car looks like.

But now I’ve got fuzzy slippers, a wood fire, and a beer with my name on it in the fridge. I’m going to enjoy my wintry mix. If you’re a retired mailman, there’s no finer weather on the planet.