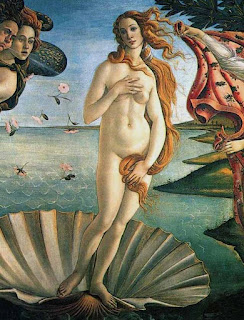 So we got into the car around 10:30 and left Jack and Devon’s house and drove around the corner and up the hill, and Lo! Lo, I say!

Biggest dang orange crescent moon ever, total sky hammock, with the biggest brightest juiciest star ever, tipped just off its toe, on a solo spangle, just hanging there over the horizon. Gobsmacked doesn’t cover it. “That’s got to be Venus,” I said to Dave, totally guessing because he wasn’t liable to contradict me, and accidentally getting it right. I have seen a fair amount of sky shows over the years and I’ve never seen anything quite like this. It’s as though Aphrodite flang her giant flag all over the western sky. The flag of Turkey, actually, for some reason, but whatever.

Venus is the goddess of love and beauty, and all the trouble that goes along with that. She is a stunner. That’s probably why I guessed her instead of big ol’ spotty Jupiter. According to the Romans, she was born when Saturn killed Uranus, sliced off his wiener, and threw it into the ocean, where it generated what was delicately called “sea foam,” as if. Up she comes out of the “foam” standing in a big scallop shell and the rest is history, or something just as good.

Anyway it was one of the coolest things I’ve ever seen. Huge orange slice of moon and big bright star that had obviously just rolled off it. OMG OMG OMG, I said to Dave, Jack and Devon have to see this! And I don’t have my phone! And you don’t have your phone! OMG OMG OMG! What to do, what to do! And Dave said, after giving me one of those looks, “They’re a block and a half away. Turn the car around.”

We turned the car around and fetched them out and soon we all stood there at the crest of the hill with our smacked gobs, and I wished aloud I had my camera, even though I have never ever taken a decent picture of a night sky and wasn’t likely to do so now, and Dave said “You could just look at it,” which is what he does.

I did. If Venus had been any closer to the moon, he would have poked a hole in her. She’s Venus, he probably wanted to. And of course both objects were enormous, about to set. Scientists insist that this bigness is an illusion, but they have at least three different theories about what causes it, to which I’d add a fourth: they’re wrong. The moon really is freaking huge on the horizon.  It starts out all dilated and nervous, and then it gets smaller after it has a chance to do some reconnaissance and climb up the sky a little where we can’t get at it, until it gets to the other side, when it blows up to do one last nanner-nanner at us before dropping safely out of sight.

Oh, victim of the modern world. Along with thinking I needed a cell phone, and a camera, I also wondered why I hadn’t read about this in advance so I didn’t miss it. But is it always good to pre-smack your gob? Maybe not. This vision was made more stupendous by its serendipity.

It’s not that I think knowledge ruins things. It doesn’t, unless your thing is ignorance. I have friends who are so attuned to the sky that they can watch the swing of the stars and the perambulations of the planets in perfect intimacy, their minds at ease in a friendly web of stardust and time. The constellations are their personal friends, the neighborhood of the near universe is familiar and dear. Their joy is amplified.

And they’re not necessarily scientists. Once there were shepherds abiding in the field, keeping watch over their flocks by night: they knew all about it. I’m a city girl. I don’t know as much as the shepherds in the field.

But still the glory shone round about me.