A lot has changed in the baby-raising business since I was inadvertently conceived and hatched. We still have Gerber Baby Food. Same baby on the label, too. But when our Borrowable House Baby showed up the other day with Gerber’s Strained Risotto In Cream Sauce, I knew we had turned a corner. We used to just have strained fruit, or strained macerated meat flecks in a Crisco binder. Now the shelf at the store contains Strained Coq au Vin and Organic Mandarin Duck and you can strip off a flyer with recommended juice box pairings. Reportedly, incidence of infant food-splattering has come way down, but there has been a pronounced uptick in the misuse of the salad fork. 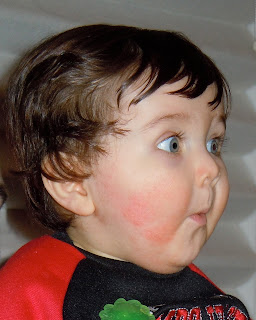 So that probably takes care of infant fussiness. In my day, parents used to like to tell their kids to quit crying or they’d give ’em something to cry about, but maybe they should have just given them Risotto. I’m told I was not a fussy baby, and it was probably just because I really loved Gerber’s Strained Apricots. I liked them so well that I wanted them to be included in my school lunches. Mom was a nice woman and she decanted the Strained Apricots into a different container so that my classmates would assume it was applesauce.  I was at an age before kids started being real dicks to each other, but it was thought that bringing in a Gerber’s jar might have put me in some social peril. The other thing in my lunch (in a brown bag, until I got the Quickdraw McGraw lunch box) was a peanut-butter and butter sandwich on Mom’s homemade white bread, wrapped in wax paper with hospital corners. Same wax paper as today: Cut-Rite. It works well enough. Not as well as plastic wrap, but we made up for it with cleaner oceans. 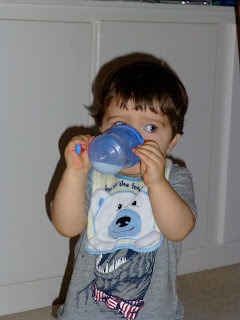 Our Borrowable House Baby also has some nifty accoutrements, including a sippy-cup that does not appear to leak at all, even if you hurl it. Like a lot of other improvements, this one may have a downside, in that the child may not develop the dexterity to drive his mother around the bend like we used to. My own mother was just about unflappable. I know, because I was always trying to get her to flap, and never really succeeded until I was a teenager and had better ammunition. I am told I was spanked at least once a day for some unspecified two-year period of my life, but I only remember about three occasions, because I totally had the rest of them coming. The spankings only quit when they ceased to have an effect.

These days spanking is out of the picture. Even parents who make their own natural baby food and use natural wipes and natural diapers and natural foods and natural detergents will not lift a hand against their child, even though it’s the most natural thing in the world to swat a two-year-old.  They’re probably right, I don’t know. I wonder. My dog Boomer had two puppies and she was attentive and loving for weeks and weeks and then one day she shut down the milk station and when they came after her making nuisances of themselves, she turned right around and snapped at them. With her teeth. Two or three days later they were model citizens. I never saw her reasoning or having any prolonged discussions with them. She never once said “we’re going to go over to the food dish now. Do you want to hop or do you want to scamper?” 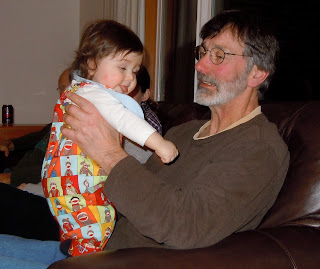 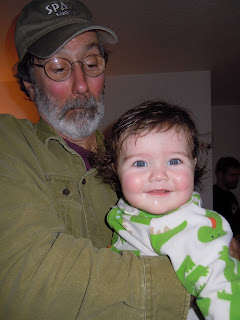 The new baby is Dave’s and my Starter Baby. Yes, we’re very old to be having a Starter Baby, but we didn’t have to whomp this one up  ourselves. He was whomped up elsewhere and gets wiped down and carted over here for petting. True, his father and his aunt were made available to us as youngsters about thirty years ago, but we were drunk and didn’t always notice. This one, we’re paying attention. Still, there was no guarantee we were going to like him a whole lot. Babies make us nervous. We’re both youngest children, which means our parents were tired and made do with hitching us to the clothesline when we were little, and when we were big they gave up on the curfews and settled for trying to get us to throw up at someone else’s house before we staggered home. Our siblings had to help take care of us and we didn’t have to take care of anything. If we’d had a baby we might have wrapped it up and stapled it to the carpet near a bowl of milk. So we needed a Starter Baby to ease us in, like a kid needs the gentle pony at the horse-barn, and this boy is it. Every dang thing in his life makes him happy. There was a five-minute squall when he briefly set himself on fire with the birthday cake, but it was surprise as much as anything, and then after that he thought the blister was interesting. He’s being beautifully brought up, but I would imagine his disposition is a genetic gift. Either that, or it’s the risotto.