We’re fresh back from the first annual Stumptown Stump Tournament, the Honorable Margaret “Munny” Munford presiding. Stump is a game in which players attempt to drive each other’s nails into a stump with a hammer that is first tossed in the air for a full revolution, caught, and brought to bear on the stump in one fluid motion. There is beer involved. The kids we know from Bowdoin College, most within hollering distance of thirty, are introducing the game here. Ah, youth! All we had was Twister. We didn’t even have Pong.

I was an observer. Even if I were inclined to toss a hammer into the air, no one wants me to. I have too much of a history. I’ve hit my own foot trying to skip stones across the water, and nobody stands behind me in horseshoes. Like a pinball rattling into the drain, I always ended up as catcher in softball after cycling through the other positions and proving myself incapable of throwing the ball farther than I could blow a snot bubble. 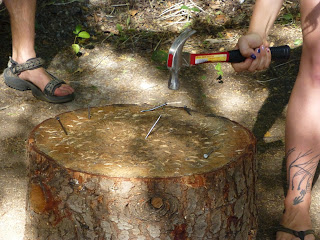 And then there was the time Dave tried to do
some repairs on the roof. The slope was steep, and the roof was slick, and I was deputized to toss material up to him so he wouldn’t have to keep climbing down the ladder. I’d stand just at the eaves. “Straight up,” he said, in the tone of voice one uses to encourage a toddler to take her first steps. “No need to put too much muscle into it. Just loft it straight up, easy, and I’ll catch it.” I have a faulty release button. The tossed items took a different trajectory every time, and Dave repeated his instructions louder, and then really, really loud. After several ill-advised attempts to snag shit out of the air, he demoted me to cleanup crew. Demotion is the better part of valor. 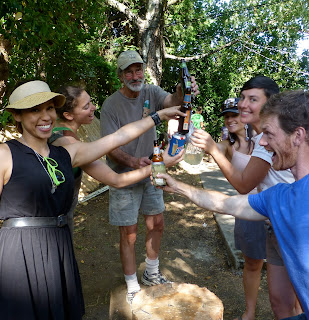 Stumptown, incidentally, is an early nickname of our fair city, so-called because settlers in the mid-1800s whacked down the lush forest they found here as fast as they possibly could. (Our species’ plan for the Earth when we’re done with it is to just rename it Mars.) Because there is a beer element involved in Stump, I thought I might be a natural, so I did give hammer-tossing a whirl, in the friendly confines of our backyard. I’m not good. I flip it into the air and then duck, as though I’ve never seen it before and it’s falling out of the sky like a rogue asteroid. Munny took a video of my efforts which,  she says, is capable of lifting her out of the deepest gloom. It’s been making the rounds as both entertainment and a cautionary tale. I did not make the cut. I don’t like to brag, but nobody could catch a hammer I’ve tossed. 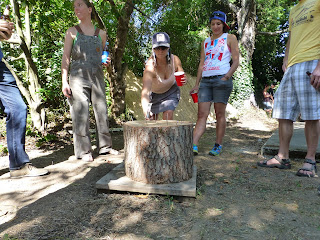 I arrived in flip-flops, confident I would be required to stay as far away from the hammers as possible. There were three stumps set up and about two dozen players. Everyone had a nail, everyone had a beer. Odds were good something was going to get hammered. Everyone took a position on a stump and the tools began to fly. There are stylistic differences in hammer-tossing technique, but it is particularly important not to be caught cocking it, even a little. Nobody wants to be subjected to mild disapproval for a teeny cock. And failure to observe any of the rules subjected the

It was the largest congregation of young people I’d seen in a decade who were not checking their phones. They were adorable. They reminded me of us, thirty years ago: attractive, easy-going, smart, and pretty likely to get laid at some point in the day. After a round-robin competition, play-off

and championship round, it was Rain who went home with the Golden Hammer. I don’t know what anyone else went home with. It was way better than Twister.

We never actually played Twister, of course. That was for our parents’ generation, resplendent in polyester stretch Capris, cone bras and beehives, Bermudas and polo shirts, all giggles and tinkling cocktails. We did something a lot like it, but we didn’t need the mat.