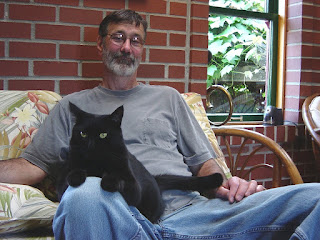 I would have been inclined to scoff at the notion of emotional support animals were it not for the example of our cat Tater. Tater is not an emotional support animal herself: she’s good company, but we do okay without  her. She’s always willing to climb on Dave’s lap and grab a knee when he’s feeling down, but since she also does it when he’s tip top, it feels like a bit of a stretch to claim she’s emotionally intuitive, rather than just a little chilly or wants her butt scratched. For a long time we all recognized the guide dogs for the blind as being your prototypical support animal–you can tell them by that furtive apologetic glance they give you that says “You look nice but I’m not allowed to play right now”–but there’ve been some interesting additions: dogs that clue into blood sugar levels, that detect seizures before they happen, and other amazing things. 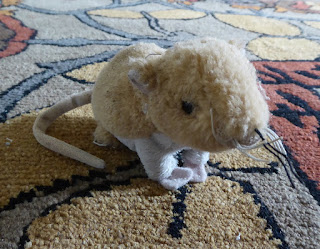 Tater is not in that league. But she has a support hamster. Her support hamster is very important to her. It is not a real hamster; it’s a stuffed plush hamster. Also, it’s not a hamster either, but “support gerbil” sounds ridiculous. Although she’ll run after almost any toy you throw for her, she will ignore you completely if you toss her support hamster. It’s vital that you not know how special it is. And when she’s under stress, which would be every time Dave leaves the house, she starts yowling and picks up her hamster and moves it somewhere else in the house to keep it safe. We guess that’s why, anyway. The hamster has been relocated at least once a day for years and there isn’t a tooth mark in it. 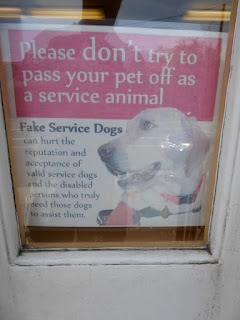 Around Portland, people have been claiming support dogs for years now, but they don’t even have to buy the little vest anymore. Merchants have given up. Dogs get to go anywhere they want to. They can even go on the merchandise and the storekeepers write their Lysol and mops off their taxes. A support dog doesn’t have to be a basic Lab or a German Shepherd. He can even live in your purse and guard your Kleenex stash.

We have a neighbor who feels very strongly that her dog, who is outside barking anytime between 4am and midnight, is a support animal. She has pointedly refused offers to help with training or purchase a bark collar and says the barking makes her feel safe. Although the only people likely to be a threat are her sleep-deprived neighbors. There’s a dot or two she ain’t connecting. 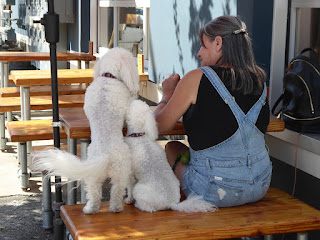 But there are support dogs and support rabbits and now, famously, a support peacock named Dexter who was turned back at the gate by employees of United Airlines, with good reason. You’d have to give a support peacock the middle seat and Aisle and Window would have to vacate every time he got a little peacock boner. (That’s just an expression. Peacocks don’t have boners but they do get wide when they’re inspired.) It’s nice to see an airline take a stand on this issue. I used to take our dog Boomer on flights back in the ’80s but she snoozed in a crate in cargo. Nowadays she could fly right alongside me as a support animal, but I don’t know. Seems like if we had myriad support dogs and support cats and support parakeets sharing the same airplane, and I guess we do, they’d kind of be obligated to bring back the smoking section, wouldn’t they?

Anyway, I’m not likely to take advantage of the airlines that way. The critters that really bother me on airplanes are those damned viruses. I’m packing my support bacteria just in case.